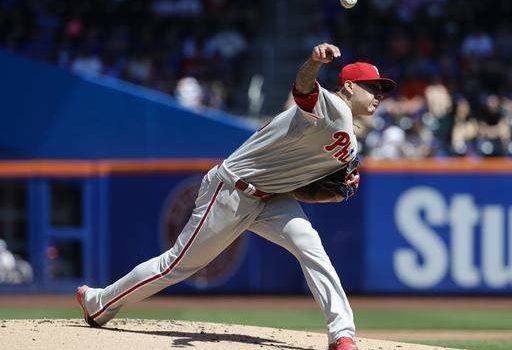 Vince Velasquez allowed five hits, one run, one walk and struck out seven in five innings in a 5-1 Phillies victory over the Mets yesterday.

He threw 103 pitches, loading the bases with one out in the first and working with runners on first and second with no outs in the second. But he worked out of both jams and retired 12 of the final 14 batters he faced.

“I guess it’s just a step in the right direction,” Velasquez said. “I had another high pitch count, another long first inning, but I battled my way through it and made my pitches.”

So, yes, Velasquez needed this, even if he found himself frustrated with his pitch count.

“It just [stinks] to put yourself in situations like that every outing,” he said. “To be in a predicament like that is very hard to get out of. On my part, I don’t want to be in that situation. I’m going to have to battle through it, but that’s just something to keep under my cap and work on in the offseason and to approach it the right way coming into spring training.”

Velasquez should get at least one or two more starts. He has pitched 124 innings, just two-thirds of an inning short of his season high in professional baseball. The Phillies had targeted 150 for Velasquez, but if he continues to pitch only five or six per start, he might not hit that number.

“Today was a struggle, but again, it was a step in the right direction.”

That is the goal for Velasquez: Enter the offseason feeling some good vibes. The Phillies remain high on him, despite his recent struggles. He is still learning on the job and everybody still sees his potential.

“The stuff is electric,” Phillies catcher A.J. Ellis said. “He has so many weapons, so many options. When he keeps growing and keeps polishing that gift up, it’s going to be really, really special. So I’m excited to be able to continue to work with him, excited now to work with him and Bob McClure and [catcher] Cameron Rupp, kind of talk to them about things, things he sees, that we see, together we can build a plan for him going forward in his career.”