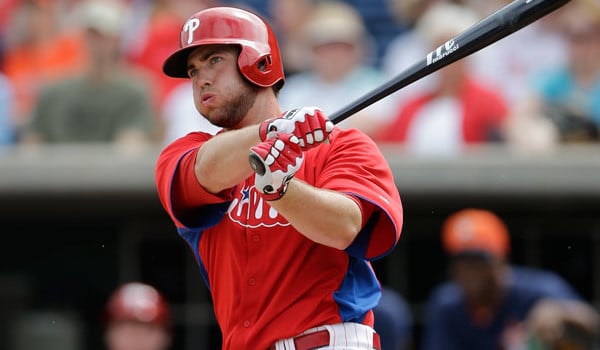 Darin Ruf (above) flashed his designated hitter muscles and Vincent Velasquez showed why he was named the Phillies’ fifth starter.

Marcus Stroman and Velasquez had scoreless outings for their respective teams in a game that the Toronto Blue Jays went on to win, 2-1, over the Phillies yesterday at Florida Auto Exchange Stadium.

Center fielder Darrell Ceciliani launched a two-run home blast in the bottom of the eighth inning off Dalier Hinojosa to give the Jays the game-winning lead.

Stroman made his final start before Opening Day and allowed three hits without issuing a walk over four strong innings. He also struck out three and had an abbreviated outing in an attempt to rest up for the 162-game grind of the MLB season.

“I understand that it’s for my best interests,” Stroman said. “My body, everything, my pitches, my arm feels great, and I’m just looking forward to getting out there Sunday for Opening Day.”

Right-hander Jesse Chavez then entered out of the bullpen and had an equally impressive day. He struck out three and didn’t allow a hit over two scoreless frames. Chavez is scheduled to begin the year as a reliever after right-hander Aaron Sanchez was announced as the Blue Jays’ fifth starter earlier in the day.

Velasquez was officially named to the Phils’ rotation Monday morning, and he promptly came through with his best outing of the spring. He struck out eight and allowed two hits and three walks over six impressive innings. Kevin Pillar was the lone player in the Blue Jays lineup with hits off Velasquez, as he went 2-for-3 with a double.

“It wasn’t easy,” Velasquez said. “I was pretty overwhelmed today. I was pretty excited. I was a little drained, to be honest. But I kept fighting and pushing through it.”

The Phillies took the first lead of the game in the top of the seventh inning against Toronto lefty Randy Choate. Designated hitter Darin Ruf delivered the big blow with a home run to center field that came on a 3-2 pitch. Choate was charged with one run on two hits over one third of an inning.