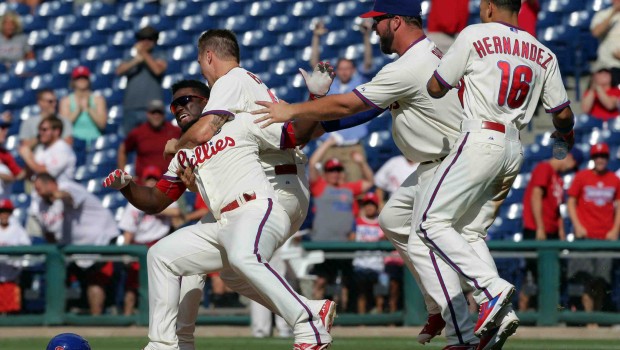 After his game-winning single, Odubel Herrera was mobbed by teammates after rounding first and was taken down to the ground by Jonathan Papelbon (above) as players piled on.

The Phillies have won five of six games since the All-Star break, and leave it to screaming fool Michael Barkann to bellow:

Hey, if they put together a streak, the second wild card spot isn’t that far away!

The trouble with Barkann’s brain farts is that you never know which ones are serious, so one must conclude none are.

True, the Phillies are hot.

Pinch-hitter Odubel Herrera’s RBI single with two outs in the 10th inning lifted the Phillies to a 5-4 victory over theTampa Bay Rays on Wednesday.

Since the break, the Phillies swept a three-game set against Miami and took two of three from the Rays to win consecutive series for the first time since last September.

Domonic Brown led off the 10th with a single off Brad Boxberger(4-6) and advanced on a sacrifice. After a bouncer to the mound for the second out, Herrera lined the 11th pitch he saw to left-center to drive in Brown.

”They let me know I was going to be the third hitter so I went down to the cage and took swings to get ready,” Herrera said through an interpreter.

”That was a real good at-bat, extremely impressive,” Mackanin said. ”He’s a free-swinger and he covers much of the plate. I felt he was going to put the ball in play.”

Papelbon (2-1) pitched two scoreless innings for the win. The All-Star closer got help from his defense in the ninth after Logan Forsythe walked to lead off and went to third on a single by David DeJesus. James Loney then grounded into a first-to-second double play with Forsythe staying at third while DeJesus was caught in a rundown. Third baseman Andres Blanco then saved a run with an outstanding, barehanded catch and throw to retireJake Elmore on a slow grounder.

Papelbon has made it clear numerous times he wants to play for a contender so it could’ve been his last game in Philly as the team hits the road before the July 31 non-waiver trade deadline.

”It doesn’t bother me,” Papelbon said. ”I just grind. I show up to play and get outs.”

The Phillies appeared to take a 5-4 lead in the eighth but a video review changed the call. Freddy Galvis hit a bouncer to first baseman Loney with one out and the bases loaded. Loney stepped on the bag and threw home. Cody Asche seemed to slide under catcher Rene Rivera’s tag and plate umpire Chris Conroy called him safe. But the Rays challenged and it was overturned after a video review that lasted 3:42.

Forsythe hit a solo homer and RBI double for the Rays.

”I don’t know what to say,” Rays manager Kevin Cash said. ”It was ugly. We did a lot of things poorly.”

The Phillies went ahead 4-3 in the sixth off relievers Brandon Gomes and Xavier Cedeno. Asche hit an RBI double and scored the go-ahead run when first baseman Loney didn’t field Ben Revere’s bouncer for an error.

Phillies rookie Adam Morgan pitched out of several jams early in the game but couldn’t make it past the fifth. The rookie lefty allowed three runs and nine hits in 4 1-3 innings.