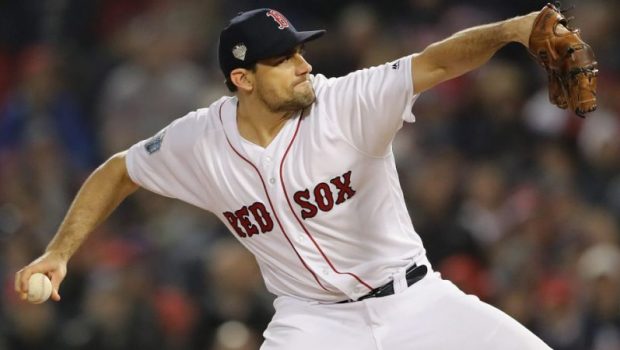 PHILLIES TOOK A SWING AND MISSED AT SIGNING RELIEVER EOVALDI!

The Phillies hope to make free agent signing news at this week’s MLB meetings in Vegas:

As in Manny Machado and Bryce Harper.

But last week they took a swing and missed at a big name reliever.

Before the Red Sox re-signed Nathan Eovaldi to a four-year, $67.5 million contract last week, the Phillies made an offer to Eovaldi, Jayson Stark of The Athletic reports.

Eovaldi chose the Red Sox in part because his preference is to pitch out of the rotation going forward.

Eovaldi, 28, made his 2018 season debut on May 30 after recovering from elbow surgery that caused him to miss the final seven weeks of the 2016 campaign and all of 2017. Between the Rays and Red Sox, the right-hander posted a 3.81 ERA with 101 strikeouts and 20 walks in 111 innings. Eovaldi really shined in the postseason for the Red Sox, making two starts and four relief appearances with a 1.61 ERA and a 16/3 K/BB ratio in 22 1/3 innings.

The Phillies continue to pursue bullpen help after having acquired José Álvarez from the Angels in exchange for Luis García last week.

Reports have indicated that the club is also interested in the likes of Andrew Miller and Zach Britton. The Phillies’ bullpen wasn’t altogether terrible last season, but was very inconsistent.

Closer Seranthony Dominguez finished with a 2.95 ERA but was sometimes unhittable and othertimes extremely hittable. Dominguez is only 24 so the Phillies likely prefer someone with more experience closing as they attempt to finally compete in the NL East after several years of rebuilding.