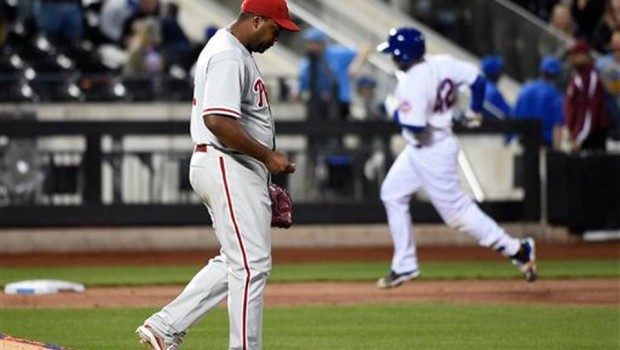 Somehow, sometime, somewhere, the Phillies will beat the Mets.

But not last night at Citi field, as the Phillies’ record against New York fell to 6-20 since August 2013 after the Mets won 6-1.

Lucas Duda and Travis d’Arnaud’s first home runs of the year supported Jon Niese’s first win as the Mets earned their first series sweep by topping the Phillies on Jackie Robinson Day at Citi Field in their first game without David Wright.

Niese scattered nine hits, holding the Phillies to one run over 6 1/3 innings despite the best efforts of Odubel Herrera and Cody Asche. The pair combined for six hits and four doubles off Niese, but the lefty worked out of multiple jams and stranded eight runners. The Phillies left 11 men on base in all.

D’Arnaud and Duda (photo above) supplied the power with solo shots off Phillies starter Jerome Williams, who was tagged for five runs (four earned) on 10 hits in five innings. d’Arnaud, batting in the No. 2. hole, gave the Mets the lead with a solo shot to left in the third.

Duda launched a solo homer of his own into the seats beyond the right-center-field fence in the fifth and scored d’Arnaud with a sixth inning RBI double.

Recalled from Triple-A Las Vegas to replace Wright, who landed on the disabled list Wednesday with a strained hamstring, Eric Campbell singled, scored and made an exceptional barehanded play to rob Chase Utley of a bunt single in the fifth.

“I see the discrepancy in the win-loss record,” Asche said. “Do I have an explanation? No. Do I wish it was different? Yeah. If we are going to make moves, we have to take care of the teams in our division. So we definitely have to play better against the Mets.”