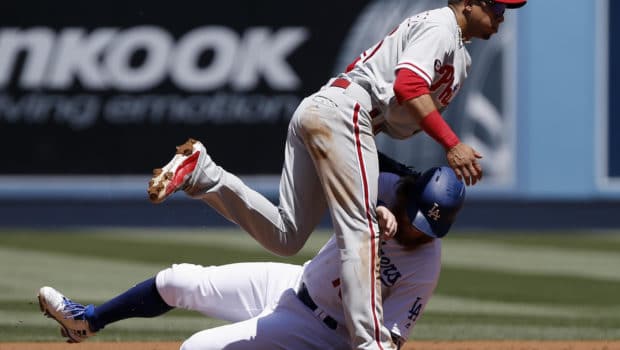 The Phillies’ Cesar Hernandez led off the game with a triple off the glove of Yasiel Puig and scored on Freddy Galvis’ single.

But the Dodgers’ Hyun-Jin Ryu allowed only one more hit in 5 1/3 innings, pitching three-hit ball into the sixth inning, Andrew Toles hit a three-run homer and the Dodgers beat the Phillies 5-3 on yesterday.

Ryu earned his first win since Aug. 31, 2014. The veteran left-hander made only one start last season and had elbow surgery last September.

Odubel Herrera hit a two-run homer for the Phils in the ninth. Kenley Jansen then came in and struck out Hernandez for his seventh save.

“We had something going early in the first, but we couldn’t to a whole lot of damage,” Phillies manager Pete Mackanin said. “Not enough hitting.”

“It was a lot of fun,” Pivetta said. “It was a little hairy through the first three innings. I was definitely nervous. But once I got into the fourth and fifth innings I kind of settled down a lot and got into my groove again.”

Justin Turner singled in Toles in the first, extending his hitting streak to 16 games. Taylor put the Dodgers ahead to stay with his solo shot in the second.

The 5-foot-9 Toles connected against Jeanmar Gomez in the sixth, making it 5-1. It was his fifth of the season.

“He can hit,” Turner said. “He can flat-out hit. Even when he’s out, he’s hitting rockets.”