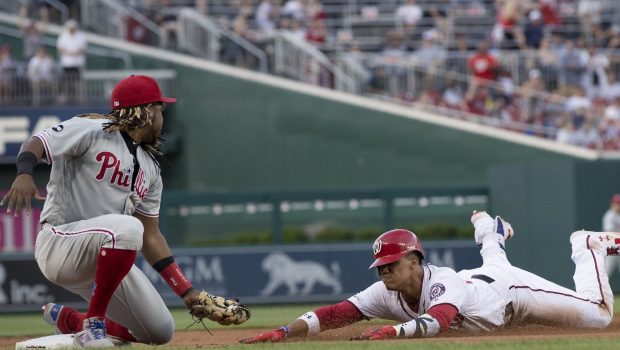 PHILLIES SWEPT BY NATS AS THE SLIDE CONTINUES!

Anthony Rendon and Victor Robles hit homers in a four-run sixth inning as the Washington Nationals beat the Phillies 7-4 on Thursday.

Two Phils were thrown out at home as their slide has reached four in a row and six of seven.

Anthony Rendon broke a 3-3 tie as he led off the sixth with a homer off Phillies starter Nick Pivetta (4-2), who was drafted by the Nationals. It was the 17th homer of the year for Rendon, who has 39 extra-base hits.

Later in the inning, Robles hit a three-run shot off reliever Edubray Ramos for a 7-3 lead. Pivetta was charged with six runs in 5 1/3 innings in a game played in the rain during the middle and late innings.

Nationals closer Sean Doolittle got the last three outs for his 16th save.

Phillies Jean Segura tied the game at 3-3 with a solo homer in the fifth off lefty reliever Matt Grace. Jay Bruce had three hits, including a homer to make it 7-4.

Washington shortstop Trea Turner retired Scott Kingery as he tried to score on a single by Pivetta in the second.

Nationals right fielder Adam Eaton cut down Bryce Harper with a throw to the plate in the fourth on an RBI single by Bruce.

The Nationals took a 1-0 lead in the first as Rendon doubled with two outs and scored on a double by Juan Soto.

Kurt Suzuki smashed a two-run homer in the second to give Washington a 3-0 edge.

Washington starter Erick Fedde struggled with his command but lived dangerously until the Phillies scored two runs in the fourth.

Cesar Hernandez and Maikel Franco had back-to-back singles with one out. Harper delivered an RBI single with two outs to score Hernandez before Bruce hit an RBI single to trim the deficit to 3-2.

Harper, batting leadoff for the first time this year, went 1-for-5 with three strikeouts.