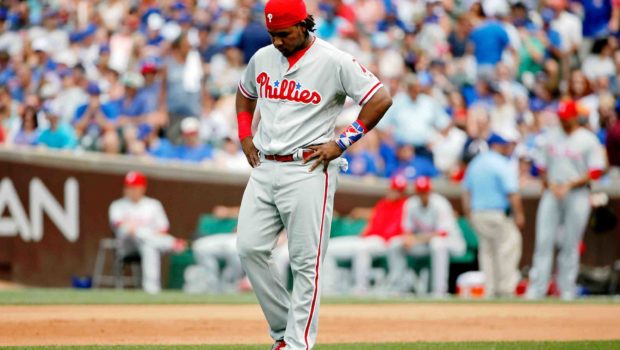 Ben Zobrist smacked a three-run home run and Miguel Montero added a solo shot that ricocheted off the right-field video board to lift the Chicago Cubs to a 7-2 victory yesterday over the Phillies at Wrigley Field for their fifth straight win.

John Lackey went seven innings and held the Phillies to four hits, including a solo home run by Tyler Goeddel in the seventh, for his second win in his past seven starts. It was the Cubs’ first three-game sweep of the Phillies at Wrigley Field since July 28-30, 1995.

“The Cubs have a very good team,” Phillies manager Pete Mackanin said. “Probably the best team in baseball right now. They beat us. Fair and square, they beat us.”

“The next goal is 25 over,” Cubs manager Joe Maddon said, happy to see his players want to complete the sweep. “Many times you’ll see a team not have the same sense of urgency on sweep day when you can win the series. I like the fact that our guys aren’t satisfied winning a series when you have a chance to sweep.”

Vince Velasquez gave up a season-high seven runs over 4 2/3 innings, and didn’t get any offensive support, which was a theme for the Phillies in the series. Chicago outscored Philly, 17-5, in the three games. Chicago has 18 wins by five or more runs, tops in the majors. The had 16 all of last season.