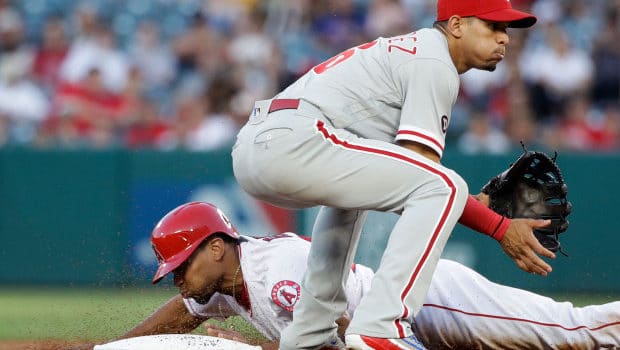 Andrelton Simmons scored the go-ahead run in the Angels‘ 5-4 comeback victory over the Phillies last night.

A wild pitch completed a two-run rally that helped the Angels sweep the three-game series. They have won their last 12 games against the Phillies.

“That was hard to take,” Phils manager Pete Mackanin said.

The Angels took an early lead in the first on Mike Trout’s two-run homer off Jerad Eickhoff, but the Phillies responded with a four-run second inning against Parker Bridwell on a two-run homer from Nick Williams and a two-run single by Freddy Galvis.

Los Angeles pulled within a run in the fourth when Kaleb Cowart doubled, went to third on a flyout and scored on Ramon Flores’ sacrifice fly.

It was still a 4-3 game when Luis Valbuena opened the bottom of the eighth with an 11-pitch walk on an unusually hot and humid Southern California night.

Simmons followed with a double that sent pinch-runner Cliff Pennington to third. Pennington scored when C.J. Cron’s hard bouncer went off the glove of Garcia (1-2). Second baseman Cesar Hernandez’s only play was to first as the tying run scored.

“The comebacker, I thought he could have caught that ball,” Mackanin said.

Garcia’s wild pitch allowed Simmons to score the tiebreaking run. Bud Norrispitched a scoreless ninth for his 17th save, and the Angels had their fourth series sweep of the season.