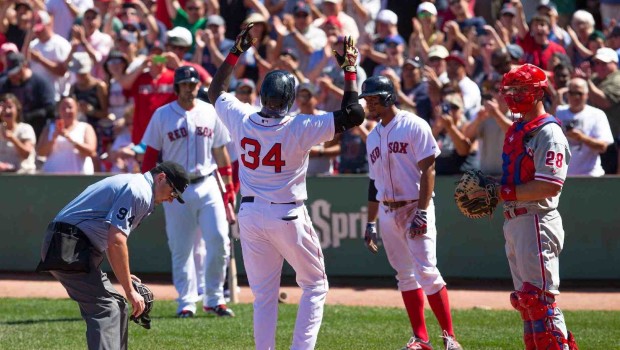 Now the Phillies’ rookie pitchers know what it’s like to pitch against the American League — and not even close to the best!

Jerad Eickhoff became the third starter to get roughed, giving up six runs in four innings as the Boston Red Sox completed a three-game sweep with a 6-2 win over the Phillies Sunday.

“These young guys are taking their lumps, but that’s what this year is all about,” Phillies manager Pete Mackanin said. “It’s their first time through the league and they’re gaining experience. They will learn from their mistakes and be pretty good pitchers.”

Adam Morgan, Alec Asher and Eickhoff combined to give up 24 hits and 19 earned runs in 14 innings in the series. On Friday, Morgan gave up six over 6 1-3. Asher seven in just 3 2-3 on Saturday.

“I was trying to go with a pitch away and it got a little more of the plate,” Eickhoff said. “He’s a good hitter and he’s going to do that with a pitch right there in that location.”

It was Big Papi’s 200th career homer in Fenway Park. The 39-year-old slugger is looking to become the 27th player to reach the 500-homer mark.

Odubel Herrera had three singles and drove in a run for the Phils, who are 1-11-2 in its last 14 series against Boston.

Jackie Bradley Jr. added a two-run triple for Boston, which beat the Phillies for the 10th time in the last 12 meetings in Fenway.

It was the seventh win in 10 games for the Red Sox.

A day after he posted his club-record ninth season with 30 homers, Ortiz stepped up in his first at-bat and sent a 3-1 fastball from rookie right-hander over the Phillies’ bullpen to give Boston a 2-0 edge.

Ortiz barely missed hitting another one in his second at-bat, sending a sacrifice fly to the center-field warning track in Boston’s four-run second. He left for a pinch hitter in the fifth because of right calf tightness.

Rodriguez (9-5) gave up one run on eight hits, striking out seven and walking one.

Bradley Jr. tripled in the second and scored on Mookie Betts’ single.