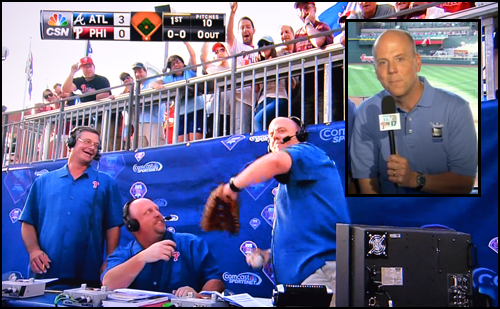 Since the team is so hard to watch, the Phils have had to revert to gimmicks like having their broadcast team work from the Citizens Bank Park stands

The Phillies have been going straight downhill since the 2011 season, when they won an MLB-best 102 regular season games before losing in the NLDS to the eventual World Series champion St. Louis Cardinals.

They were so good three years ago that they also led major league baseball in local TV ratings, averaging a 9.1 Neilson rating, which computes to an average of 276,000 homes tuned in.

This season, the Phils are one of the worst teams in the league — their 52-63 record extrapolates to a 70-92 mark, beating last season’s 73-89 for ineptitude.

Perhaps worse from the team’s perspective, their local TV ratings have taken a bigger hit.

Comcast has taken control of the local TV broadcast business — they own the rights with the Phillies retaining 20%. And when the new contract the team signed which guarantees them $2.5 billion over the next 25 years kicks in next season their revenue is tied to advertising sales which are based on this season’s performance.

How would you like to be going to advertisers to try selling a team that is awful with virtually no prospect of getting better for many years under current ownership.

Here are the rankings of all MLB teams, provided by Forbes.com, which shows the Tigers, Cards and Pirates leading the pack and the Phillies among clubs whose televised games are the third-highest watched offerings on cable TV in the Philly market.