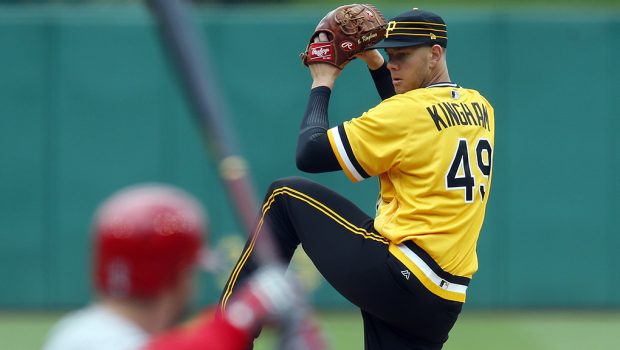 PHILLIES STUB A TOE IN PITT, REMAIN IN 1ST PLACE!

Nick Kingham pitched six solid innings and drove in two runs, as the Pirates avoid a three-game sweep with a 4-1 win over the visiting Phillies.

The Phils remained in first place in the NL East because the Atlanta Braves also lost to the Milwaukee Brewers.

In his eighth major league start, Kingham (3-4) allowed one run and four hits with five strikeouts and one walk for his first win since May 4.

With two outs, and Austin Meadows on third and Jordy Mercer on second, Kingham doubled over left fielder Rhys Hoskins to drive in both runners and put Pittsburgh ahead 3-1. Josh Bell followed with a double to score Kingham.

Kingham got in his only jam by allowing the first two batters to reach base in the sixth, but induced Carlos Santana to pop out and struck out Nick Williams and Scott Kingery to get out of it.

Drew Anderson (0-1) allowed four runs and eight hits with four strikeouts and one walk in his season debut for the Phillies. Anderson, who was recalled from Triple-A Lehigh Valley to make spot start, said he arrived in Pittsburgh at around 11:30 p.m. Saturday.

“In the minor leagues, you get pretty much used to it. Showing up at 4 a.m. and pitching that day,” Anderson said. “I just came in and I just wanted to battle, and save the bullpen and get a win. Just a couple pitches (got away). It just happened.”

Despite Anderson taking the loss, Phillies manager Gabe Kapler said he was pleased with his performance.

“I thought he did a good job giving us some length,” Kapler said. “So, it was impressive to see a young pitcher come up and really compete against a good lineup.”

Pittsburgh snapped its five-game losing streak, while the Phils’ six-game winning streak ended. The Phillies, who entered Sunday tied with the Atlanta Braves for first in the NL East, lost for the second time in 10 games.