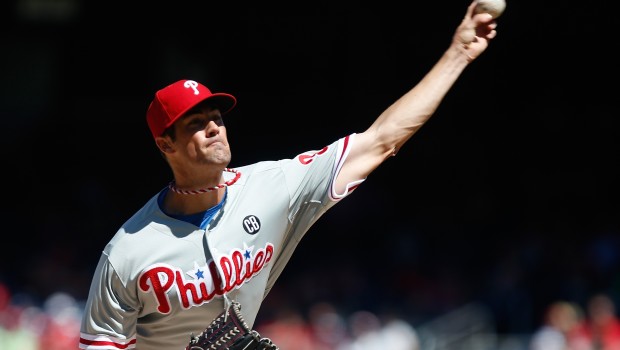 As the Phillies struggle to get a hit, let alone a run and, God forbid, many victories, they are still trying to trade Cole Hamels and Jonathan Papelbon:

Hamels remains the No. 1 player on the MLB trade market. He is signed at a market-friendly deal of $23.5 million per season through 2018, with a team option that will probably be vested at the time of a trade at $24 million. The contract covers Hamels from the age of 31 to 35. Since Max Scherzer got seven years and $210 million and Jon Lester got six years and $155 million, Hamels’ deal looks like a bargain. The money commanded by the 2016 free-agent class of starting pitchers, led by David Price, Johnny Cueto and Jordan Zimmermann is expected to dwarf what Hamels is due, which makes him an even more valuable trade asset. The Phillies are determined to get at least two elite prospects in return, and with so many teams involved in pennant races, they should get close to their asking price.

Papelbon is the best closer available on the present trade market, and teams like the Blue Jays, Rockies, Reds, Indians, Tigers and Marlins could certainly use him to improve the back end of their bullpens. The Phillies are willing to eat some of his salary for the right player return.