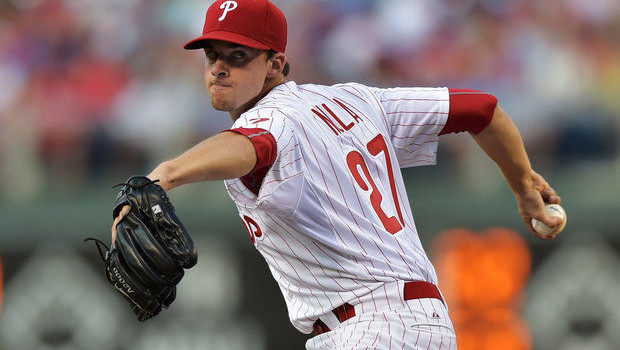 PHILLIES STILL ON THE HUNT FOR YOUNG ARMS AT WINTER MEETINGS

But you might see some ripples of hope — especially if they can add some young arms.

“We really want to raise the floor and add some depth,” general manager Matt Klentak said earlier this offseason. “Kind of at every turn, that’s what we’re going to be focused on. And in the pitching department, I think we really need to work on just — again, I say ‘raise the floor’ — but kind of establish sort of a firm foundation of pitching. That’s not going to end when we break camp at the end of spring training. That’s something we’re going to be committed to for a long time.”

So far, most of the gains the Phillies have made this offseason are pitching-related:

Right-hander Jeremy Hellickson in a trade earlier this month with Arizona, and it claimed relievers Dan Otero, A.J. Achter and Michael Mariotoff waivers, as well as outfielder Peter Bourjos. The Phils also signed reliever James Russell to a minor league contract with an invitation to spring training, and they cut ties with outfielder Domonic Brown and right-hander Justin De Fratus.

They need at least one more veteran starter. Hellickson, Aaron Nola and Jerad Eickhoff seem like safe bets to make the Opening Day rotation, with Adam Morgan, David Buchanan, Alec Asher and Miguel Alfredo Gonzalez competing for the other jobs.

The Phillies have talked with teams about closer Ken Giles, who could land them a few prospects, but that’s the key: They have to be legitimate prospects for them to be tempted.

“Honestly, I think with the present roster, if we needed to field a lineup tomorrow, we generally could do that,” Klentak told MLB.com at the general managers meetings in Boca Raton, Fla., earlier this month. “That doesn’t mean we’re going to stop looking for opportunities to upgrade or add depth wherever we can. But one of the beauties, mostly on the position player side, is most of the team that was on the field that ended the year last year returns next year. So, again, that doesn’t mean we’re going to stop trying to find alternatives or upgrades or just build depth.”