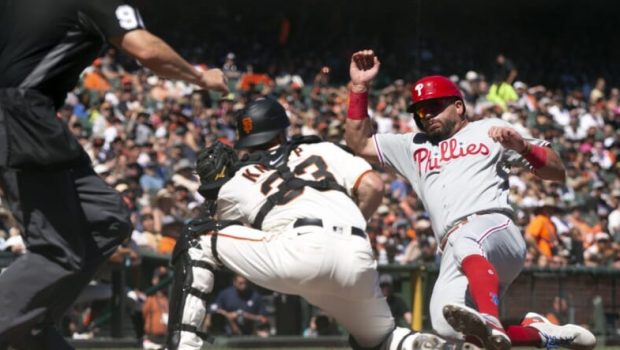 Joc Pederson drove in three runs, and the Giants beat the Phillies 5-4.

The Giants won their second in a row following a seven-game losing streak. The wild card-contending Phillies have lost five of six.

“I don’t think they’re tight. We’re just going through a stretch right now. We’ve got to get out of it,” Phillies interim manager Rob Thomson said.

Pederson got two hits to continue his strong series against the Phillies. On Friday night, he homered and drove in five runs during a 13-1 romp.

Philadelphia pitchers again had trouble with their control — a day after issuing 10 walks, they walked three batters in the sixth. With the score 3-all and the bases loaded with two outs, reliever Brad Hand (3-2) got ahead of Pederson in the count 0-2, then walked him to force home the go-ahead run.

Kyle Schwarber tripled against John Brebbia to lead off the Phillies seventh, but was stranded. Jarlin Garcia relieved with two outs, walked Bryce Harper and struck out J.T. Realmuto to protect the lead.

Zack Littell (2-2) got one out in the sixth. Camilo Doval, the seventh Giants pitcher, got four outs for his 19th save.

“I don’t think we want to push him for four-out saves all the time. But he’s a big, strong physical guy and he was well-rested,” Giants manager Gabe Kapler.

Jean Segura hit two doubles for the Phillies, including a hit in the sixth that made it 3-all. Bryson Stott homered for Philadelphia.