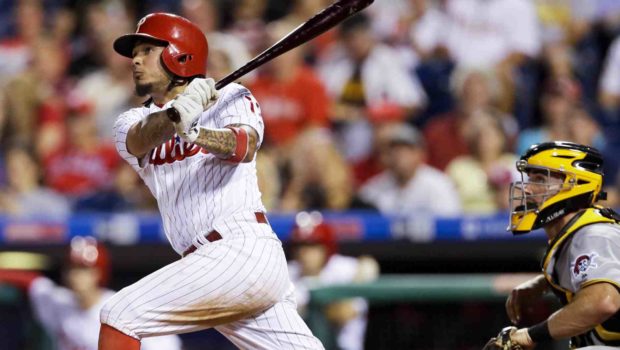 PHILLIES ARE A SLEEPER TO CONTEND FOR WILD CARD IN 2017!

Unlike some other rebuilding clubs, the Phillies are sneaking up fast on a return to contention.

With a starting staff that appears solid, the Phillies spent the offseason bolstering their bullpen and lineup with veterans on short-term deals.

The hope is that the Phillies can launch into contention, or flip guys such as Howie Kendrick, Joaquin Benoit or Pat Neshek.

After that, Philly will start to get big league production from their stable of near-ready prospects, including minor league power duo Dylan Cozens and, less likely, Rhys Hoskins. They combined for 78 homers at Double-A Reading last season.

The Phillies’ top prospect, SS J.P. Crawford, is overdue for a breakout and could arrive this season.

With little in the way of long-term deals on the books and a team that looks to be both young and competitive, the Phils are poised to make a major splash in the next couple of years. That could be a blockbuster trade or a big-ticket, free-agent item.

Either way, it looks like Andy MacPhail’s latest rebuilding effort won’t be a prolonged one. And if you’re looking for a sleeper wild-card contender for this season, you could do worse than picking the Phillies.

Presently, the Phils project to win 73 games. That’s with an offense that ranked 28th in the league, which would actually be a two-spot improvement over last year’s rock-bottom attack.

If some of these highly invented, short-term veterans –Howie Kendrick, Michael Saunders, etc. — pay off or a couple of the kids make a leap, the Phillies could start moving up the ladder very quickly.

If that happens, they have all the resources they could want to bolster a playoff run.