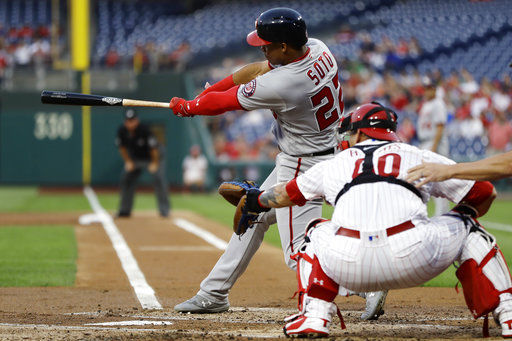 History will record that the Phillies have had a chance to win the NL East pennant but that they are blowing it.

Last night’s loss to the Nationals put the Phils at 70-61, three and a half games behind the Atlanta Braves.

The Phillies are 6-12 since Aug. 8 and have dropped five games in the standings during that span.

Zach Eflin (9-5) allowed five runs — three earned — and eight hits in 5 1/3 innings. His throwing error in the fourth cost him.

The Nationals had the bases loaded with one out when Strasburg put a bunt down. Eflin picked it up barehanded and his underhand toss to the plate sailed high for an error, allowing the go-ahead run to score.

Adam Eaton followed with a slow roller to the same spot and Eflin made the exact same play and got the out at home.

Trea Turner then knocked in another run on a bloop single that fell in because left fielder Rhys Hoskins broke back at first.

“We gave them additional outs and you can’t do that against this team,” Phillies manager Gabe Kapler said.

Eaton greeted reliever Luis Avilan with an RBI double in the sixth to make it 5-2.

Hoskins crushed Ryan Madson’s first pitch in the eighth for his 27th homer.

Justin Miller tossed a perfect ninth for his first save in his first try in his 39th appearance.

“He comes in and brings so much energy on the mound,” Strasburg said. “The hard work pays off.”

Washington took two of three from the Phillies at home last week after tradingDaniel Murphy to the Cubs and Matt Adams to the Cardinals.

Down 2-0 in the third, the Phillies tied it on an RBI triple by Roman Quinn and an RBI single by Cesar Hernandez. Strasburg struck out Asdrubal Cabreraswinging to strand runners at second and third.

Eflin retired the first two batters before Bryce Harper, Anthony Rendon and Juan Soto hit three straight singles in the first to give the Nationals a 1-0 lead.

Wieters led off the second with his sixth homer to make it 2-0. He said he was using a new bat after realizing the one he used the past few games was cracked.

“He was able to locate his fastball, throw a high fastball, and made corrections since the last start,” Wieters said.