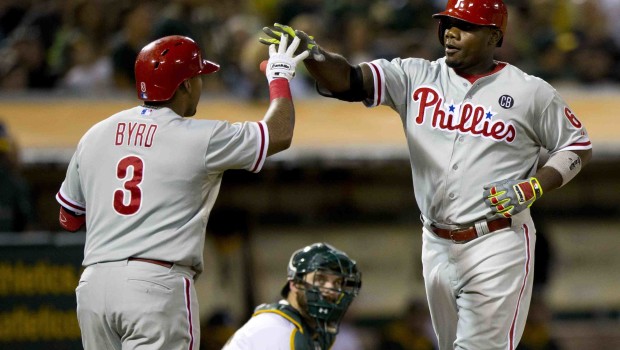 Coco Crisp had two hits and drove in a run, supporting another strong outing from Jon Lester, and the Oakland Athletics defeated the Phillies 3-1 on Friday night to regain the top spot in the chase for AL wild cards.

Derek Norris and Eric Sogard also drove in runs for Oakland, which moved a half-game ahead of the Kansas City Royals, who were beaten by the Detroit Tigers earlier Friday.

Ryan Howard (photo above) hit a home run for the Phillies, who have lost five of six.

Lester (16-10) allowed one run and five hits in seven innings. He walked two and struck out seven en route to his third consecutive win. Sean Doolittle pitched the ninth for his 22nd save.

Lester has pitched at least six innings in his past 18 games, including all 10 with the A’s. He hasn’t allowed more than three earned runs during that span.

Phillies starter David Buchanan (6-8) gave up three runs and six hits in 6 2-3 innings. He walked two and struck out six.

Buchanan had allowed two earned runs or fewer in each of his previous six starts.

The A’s scored all three of their runs after two were out in the second inning. Norris, Sogard and Crisp hit consecutive singles. Buchanan retired 10 of the next 11 batters.

Howard jumped on Lester’s first pitch of the fourth inning for his 22nd homer, a blast that sailed well over the center field fence.

Lester retired 10 of his final 12 batters.

Each team had a runner thrown out at the plate in the late innings. Jed Lowrie led off the A’s seventh with a triple but was thrown out by Maikel Franco on a safety squeeze.

Freddy Galvis doubled to lead off the Phillies’ eighth and went to third on Ben Revere’s groundout. Josh Donaldson threw out Galvis at home on a sharp grounder by Carlos Ruiz.