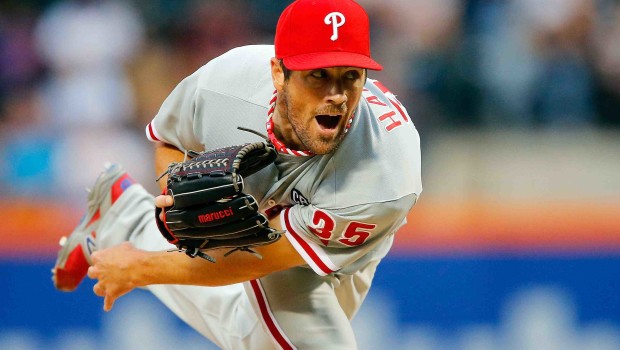 Yankee Stadium is in the Bronx, which is a long ride from Broadway.

But on Wednesday afternoon, the Phillies will play a matinee that will attract lots of out-of-towners, just like the theaters around Times Square do mid-week.

But in this case, the visitors will be major league scouts sent to check out Phillies ace Cole Hamels.

Hamels will pitch against the Yankees after missing Friday’s start against the Cardinals because of tightness in his right hamstring. He threw a bullpen session Sunday in Philadelphia and gave a reporter the thumbs up when asked if it went well and if he planned to pitch in New York.

That is good news for Hamels, the Phillies and contending teams everywhere.

It is no secret the Phillies are trying to trade Hamels before the July 31 non-waiver trade deadline. They are on pace to lose 107 games, so the plan is to trade Hamels and as many veterans as possible (Jonathan Papelbon, Aaron Harang, Chase Utley, Ryan Howard, Carlos Ruiz, Ben Revere, etc.) for a group of prospects that conceivably could speed up the rebuilding process.

Hamels is the Phillies’ most valuable trade chip. He is 5-5 with a 2.96 ERA in 14 starts this season, but his record is deceiving as he has the third-lowest run support average in major league baseball.

The Phillies are counting on Hamels to land them their greatest haul of prospects before the trade deadline. Of course, there are stumbling blocks. Hamels has a limited no-trade clause, but more important than that, he is making $22.5 million this season and is owed at least $73.5 million from 2016-19, which includes a $6 million buyout on a $20 million club option.

Phillies president Pat Gillick said Sunday the Phillies are willing to take on a portion of a player’s salary to get the right players back in a trade.

But Hamels only gets traded if he is healthy. He said he is.

“There are times when you just want to be smart no matter what the circumstances are,” Hamels said. “I know they’re a little bit different than previous circumstances in previous years, but I’m not going to change the way I like to play the game and prepare for the game.”