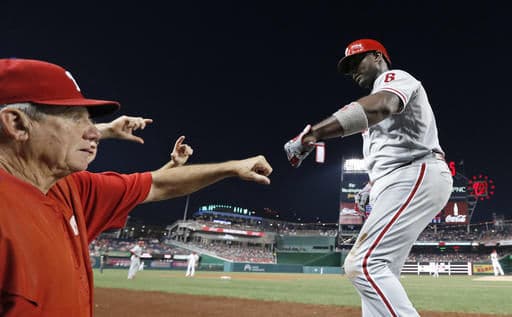 The Phillies will be sending the great Ryan Howard out in style.

The last three games of the regular season will be used to honor the last remaining member of their 2008 World Series championship team.

General manager Matt Klentak has seen the fans give Howard extra applause, indicating they already know what he can’t yet say publicly: that Howard’s time as a Phillie is coming to an end and that he’ll play his final games in a Phillies uniform at Citizens Bank Park when the Phils close out the season against the Mets from Sept. 30-Oct. 2.

“We are not going to formally announce anything before the end of the season. It would be irresponsible and premature. But I think Phillies fans are smart and they generally understand what’s going on,” Klentak said.

“And as we’ve seen the second half play out — you guys have seen a lot of it — the fans are recognizing that this is getting closer to the end and they want to express their appreciation for what Ryan has meant to this franchise. My hope is that in the final home stand — those three games against the Mets — we would be able to do something that Ryan would be able to get the proper end of a season that he deserves.”

Manager Pete Mackanin will start Howard all three games against the Mets. He’s witnessed the reception that Chase Utley and others have received upon their return (or farewell) and believes Howard will get the same.

“As much as [the fans] gave the other two,” Mackanin said. “He’s really meant a lot to this organization.”

Mackanin has gone back and forth all season on how to split the playing time between Howard and his successor — at least currently — Tommy Joseph. The 24-year-old burst into the bigs with a much-needed power stroke and instantly stole a chunk of Howard’s playing time. But as Major League pitchers began to adjust to Joseph, Howard regained playing time on the strong side of a first-base platoon. Mackanin said at the beginning of September that Joseph would again get the majority of the playing time the last month of the season, but he has switched course again.

Although Joseph has shown his flaws at the plate — namely an on-base percentage south of .300 — his 19 homers this season should safely pencil him in as the starter at first base on Opening Day in 2017.

“To come from not even on the roster to hitting 20-plus homers in his first year in the big leagues, in a time-shared position no less, I think it’s pretty impressive,” Klentak said. “We can win with players that are not on-base machines, it’s possible. But in order to be a key cog in a lineup you’re going to have to hit the ball out of the park, literally, and as long as Tommy can continue to put up the power numbers he’s doing, that can work.”