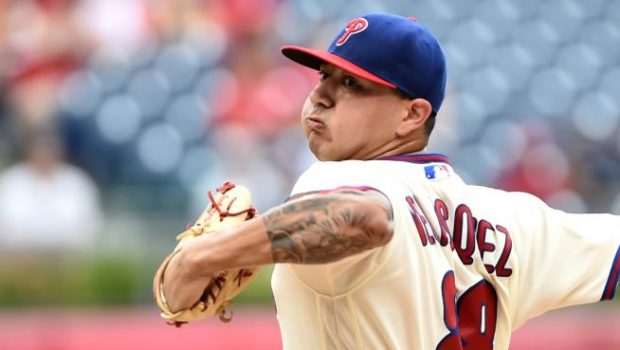 PHILLIES SEND WINLESS VINCE OUT TO COUNTER THE FISH!

Riding a four-game winning streak, the Phillies will hand the ball to Vince Velasquez tonight.

Manager Don Mattingly will turn to Wei-Yin Chen (2-0, 3.94 ERA) to open the series, as the lefty takes the mound for the fourth time this season in hopes of keeping his slate clean for April.

Chen had his best start of the young season in his last trip to the mound, throwing seven innings of no-hit ball against Seattle, as 64 of his 100 pitches went for strikes. He’s doing all of this with a partial tear to his UCL, which he sustained last summer.

To counter, the Phillies (9-9) will send Velasquez (0-2, 7.20), a flame-throwing right-hander who has given up at least three earned runs in each of his three starts.

His last time out was his most successful, going six innings against the Mets while giving up three runs and five hits, and he didn’t receive a decision the Phillies lost, 5-4.

But it was that sixth inning that cost Velasquez, giving up a three-run home run, spoiling what had otherwise been a solid outing.

“There’s a lot of positives out of this,” Velasquez said. “Big adjustment. Big adjustment. I’m happy with my performance, but that should have been eliminated. That shouldn’t have happened.”

Since that loss, the Phillies ripped off a four wins, including a sweep of the Braves over the weekend. So far this season, they have played all but their opening three games against NL East opponents, going 8-7 in division play.