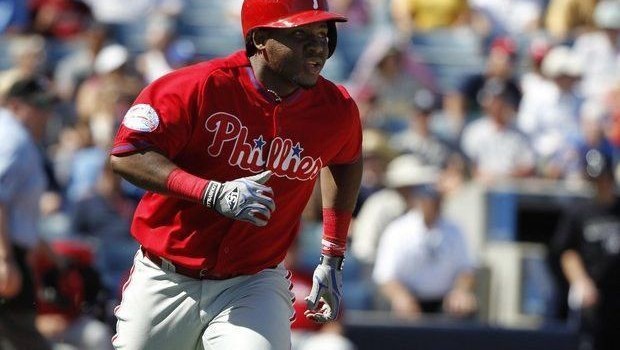 PHILLIES SEND FRANCO, RODRIGUEZ, OGANDO DOWN TO THE MINORS

So, on Friday morning they optioned Franco, their No. 3 prospect as ranked by MLB.com, along with lefty Joely Rodriguez and right-hander Nefi Ogando to minor league camp.

Franco, 22, went 6-for-30 (.200) with one RBI and four strikeouts this spring. He came into camp with an opportunity to push third baseman Cody Asche for a job on the big league roster. Last spring, Franco went 7-for-38 (.184) with two RBIs and six strikeouts. He didn’t record an extra-base hit either year.

“Maikel’s time’s going to come,” said general manager Ruben Amaro Jr. “I know he’s upset, because I know that he probably wanted to write a different script for himself, but the fact of the matter is just like any other young player who we feel is going to impact the major leagues, his time will come when it’s time for him to come.

“I think there was probably some element of him trying to do a little too much, like he did last spring. But he doesn’t need to impress us. He just needs to go play.”

Franco will do that in the minors, spending most of his time at third base and some at first base. He spent last year with Triple-A Lehigh Valley, batting .257/.299/.428 with 16 home runs and 78 RBIs. In 16 games with Philly last season, Franco hit .179 with five RBIs and 13 strikeouts.

“When he gets a chance to be back in the big leagues, play a few games and have some success, it’ll carry,” Amaro said. “It’s just a matter of him getting the opportunity, and he’ll get the opportunity, because he’s going to create it for himself.”

Rodriguez, acquired from the Pirates in the Antonio Bastardotrade, had been mentioned by the Phils as a possible rotation candidate. The 23-year-old gave up two runs (one earned) on four hits and three walks over nine innings this spring.

“He’s got a good, steady demeanor. Great kid,” Amaro said. “I think he’s going to help us. I’m not sure when. At some point this year, he’ll probably help us.”

Ogando, 25, also impressed in four appearances this spring. He held opposing batters to four hits and struck out six while allowing only one run over 5 1/3 innings.