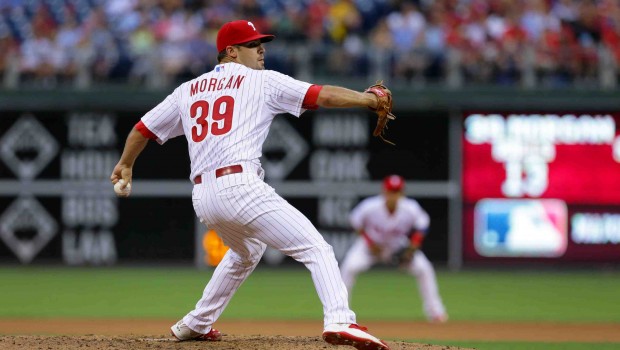 The Phillies entered the All-Star break as the worst team in baseball by 9 1/2 games, in part because their closest competition straddled the break with 17 wins in 23 games.

And the Phils have emerged from the break as one of the majors’ top teams, which they will try to maintain in a three-game series that begins tonight at Milwaukee’s Miller Park.

Cameron Rupp homered for the third time with eight RBIs in six games this month after going deep once with seven RBIs in his first 43 of the year.

“I’m feeling comfortable,” Rupp told MLB’s official website. “I’m getting pitches to hit that I can drive, staying within myself and trying not to do too much. I think there’s more there.”

Even with the added power, it seems unlikely the Phillies will be able to continue climbing if the starting pitching doesn’t pick it up. Over an 8-6 span, the rotation has a 6.75 ERA and .353 opponent batting average, though Adam Morgan’s latest outing was much better.

Morgan (3-3, 4.06 ERA) was impressive in his first two big league starts before falling into a five-start rough patch with a 1-2 record and 5.61 ERA. The rookie left-hander emerged from that in Saturday’s 4-2 win in San Diego, limiting the Padres to two runs – one earned – and six hits in six innings to help vault Philadelphia from the bottom of the majors.

He retired the first nine batters, but then again fell into some inconsistency. The first time through the lineup, he’s limiting opponents to a .242 average. In the second and third, they’re batting .305.

“The second time through the lineup I tried to be too fine,” Morgan said.

His opposition is also seeking some consistency. Wily Peralta is 1-2 with a 6.06 ERA in three starts since returning from more than two months on the disabled list with a strained oblique. Even so, after giving up three runs in seven innings of Saturday’s 3-0 loss to St. Louis, Peralta (2-7, 4.48) feels like he’s headed in the right direction.

“I threw better than the last time,” Peralta said. “After the second inning I started feeling better with my breathing and commanding my offspeed pitches.”

The right-hander has struggled even more against Philadelphia in three career starts, going 1-2 with an 8.82 ERA. Domonic Brownis 3 for 7 with a home run, but is batting .174 in his last eight games.

The Brewers swept a four-game set in Philly a month and a half ago while batting .364 with an average of seven runs per game, but the Phillies did the same to the Brewers from July 7-10, 2014, to improve to 13-6 at Miller Park since the start of 2010.

After Thursday’s 9-2 loss at the Chicago Cubs, Milwaukee is heading into the series fresh off a three-game sweep. The Brewers are 6-16 since the 17-6 run, losing five of six with two runs a game and a .196 average.