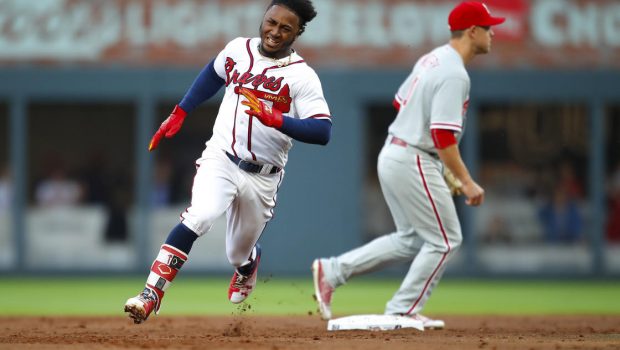 A frustrated, listless crowd looked up at the Citizens Bank Park scoreboard and saw the Braves with 19 hits, the Phillies with four.

The Braves looked like the National League East champs. The Phillies, nipping at their heels not too long ago, looked like a team ready for the offseason. A series that once appeared destined for bedlam felt small before the apathetic crowd of 24,000.

An offensive onslaught helped the Braves upend their northern rivals, 10-2, and reach the 90-win plateau. Mike Foltynewicz pitched five frames and struck out nine. He became the first Brave to reach 200 strikeouts since Javier Vazquez in 2009.

Meanwhile, the Phillies have lost nine in a row. On Sept. 7, they were within 2-2/3 games of the Braves. The eventual division champs reeled off a 6-1 road trip, ballooning their lead to 7-1/2 games.

The four-game sweep at SunTrust Park a week ago fittingly ended the tale. The Phillies still haven’t recovered, sitting 12 games back and falling behind Washington in the standings.

While the Phillies floundered, the Braves rose. Losing the series in New York was a blip on what’s been a successful September, where the Braves are 16-10.

“This year has been unbelievable,” manager Brian Snitker said. “What we’ve accomplished, how we’ve grown with the youth. These guys in there should be very proud of themselves. Ninety wins is hard to do. That’s a great accomplishment for our entire club. It just speaks volumes to their tenacity and dedication they have to go out and win.”

In his final regular-season start, Foltynewicz allowed one hit, lowering his opponents average against to .195, just besting Julio Teheran’s .196 mark for the lowest in team history.

Foltynewicz is lined up to start game 1 of the NLDS on Oct. 4. He looked worthy of that mantle Friday, exiting after he’d shown enough to suggest he’s ready.

“When (pitching coach) Chuck (Hernandez) went into my last bullpen session, he said think about (how) you might have the Dodgers or the Rockies (in the postseason). Think about them when you’re up at-bat but be aggressive, which I think I was tonight.”

Phillies starter Jerad Eickhoff struck out seven consecutive Braves before Johan Camargo took him deep for a 1-0 lead. Ozzie Albies followed with a single, prompting Gabe Kapler’s quick hook that summoned the Phillies bullpen with one out in the fourth.

Eickoff was lifted at 56 pitches, though this was his first start in over a calendar year after being sidelined by nerve irritation in his right hand and a right-lat strain. He’d thrown one inning each in two relief appearances this month.

Camargo’s emergence has been paramount in the Braves’ rise. Despite missing time, he’s hammered 19 home runs, exceeding all projections of his power potential.

After Edubray Ramos walked Tyler Flowers, Charlie Culberson singled home a pair of runs. Ronald Acuna knocked in a fourth run and advanced to second on Roman Quinn’s error. Kapler called for Aaron Loup – the third pitcher of the inning – to finally stop the bleeding.

Freddie Freeman had a three-double game, his second this season after having none in his career entering the year. Camargo and Acuna had three hits, while Albies, Culberson and Ender Inciarte had two-hit evenings.

The Braves became the first NL team to win 90 games after three consecutive 90-loss seasons since the worst-to-first 1991 Braves. This season marks the Braves’ 18th 90-win campaign, tied with St. Louis for the second-most in the NL since 1962 (Dodgers, 23).

“We have to win the next two games to have a chance,” Freeman said. “We need a win. We know the Rockies won tonight, so we have to go out there (tomorrow) and try to give (Phillies starter Aaron) Nola more than he can handle.”