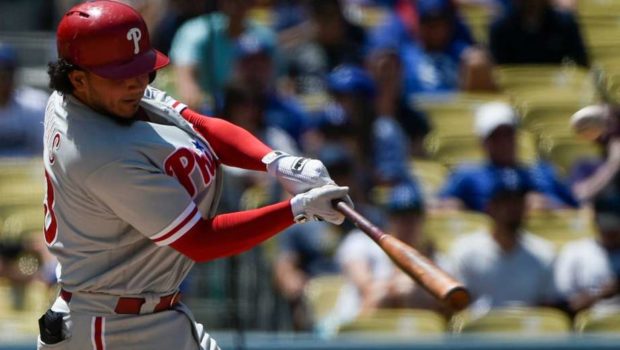 PHILLIES SALVAGE A GAME AGAINST THE DODGERS 6-2

Freddy Galvis slugged a three-run homer (above) and pinch-hitter Ryan Howard added a three-run double yesterday in the Phillies’ 6-2 win that snapped the Dodgers’ four-game win streak and salvaged one win for the Phils in this series..

“Grant’s been throwing the heck out of the baseball,” Dodgers manager Dave Roberts said of using the left-handed Dayton, who had not allowed a hit in his previous three appearances.

“I’m swinging well and just trying to stick with it,” said Howard, who has been playing in a reserve role most of the season. “It’s a game of ups and downs. You have downs, and some point you’re going to have ups.”

Dodgers starter Scott Kazmir (9-6), removed with a lead he protected from the first inning, took the loss. Phillies starter Jeremy Hellickson left the game after five innings with back tightness. He retired the final 13 batters he faced and struck out seven.

“There were some at-bats we probably should have run the count and stress him a little more,” Roberts said of his offense’s approach. “We had Hellickson on the ropes, yeah. We let him catch his breath and get a rhythm, and next thing you know, he’s through the fifth inning.”

Hellickson, who allowed one run on three hits, was relieved by Tuesday callup Elvis Araujo, who hit Dodgers shortstop Corey Seager on the right wrist with a 91-mph fastball in the sixth inning but was the winning pitcher. X-rays on Seager were negative, and he said he expects to play Friday.