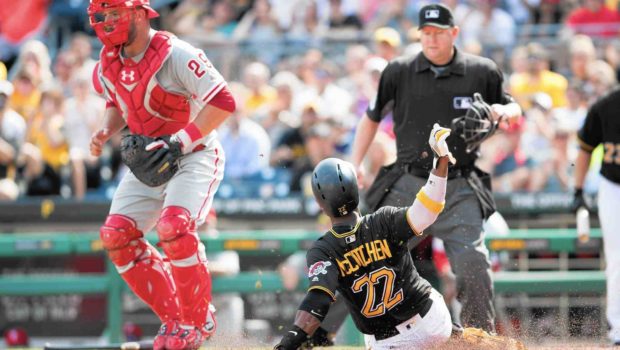 The Phillies made a lot of noise on the basepaths yesterday in Pittsburgh but they came up empty.

They had the bases loaded in the third inning and were stealing bases easily off rookie pitcher Tyler Glasnow. It was a tie game.

But a popout by Cody Asche and a groundout by Freddy Galvis would eventually come back to haunt them in a 7-4 loss to the Pirates at PNC Park.

The Phils pulled ahead by run in the top of the fifth, but couldn’t overcome a five-run response by the Pirates, despite five stolen bases.

“The guy was slow to the plate, and we took advantage of it,” Phillies manager Pete Mackanin said. “We stole five bases, still couldn’t get any. The third inning haunted us.”

Odubel Herrera and Cesar Hernandez each stole two bases off Glasnow, with Galvis stealing one in the second inning. Though the Phillies were able to move around the bases, they also stranded 14.

For a team that ranks 15th in the majors in stolen bases with 48, five stolen bases in one game is a definite outlier. The rhythm became the silver lining of a tough loss.

“It’s nothing in particular, really, but we just take a look at the pitcher,” Herrera said through translator Diego Ettedgui. “So it depends on the situation, depends on the pitcher. But when we see we can take advantage of it, we really try to do that.”