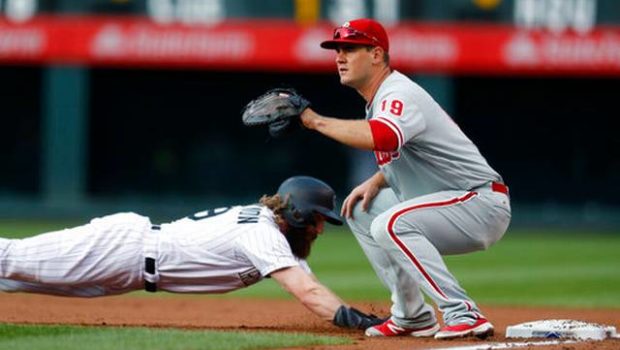 PHILLIES ARE ROAD KILL AGAINST THE ROCKIES 8-5!

Gerardo Parra added three hits and two RBI for the Rockies who won for the fourth time in five games.

Daniel Nava homered, tripled and singled for the Phillies, who fell to 0-5 on their eight-game road trip.

Trailing by seven runs, the Phillies got a three-run homer from Nava in the eighth inning off reliever Zac Rosscup, pulling within 8-4.

Pat Neshek finished up, allowing an RBI single by Freddy Galvis in the ninth in his first appearance against his former team since the Rockies acquired him in a July 26 trade.

The Rockies batted around in the first inning and Nick Pivetta (4-7) did himself no favors by walking leadoff man Charlie Blackmon, and then hitting D.J. LeMahieu with a pitch before Nolan Arenado singled to load the bases. Parra followed with another single and Pivetta trailed 2-0 before recording an out.

A fielding error by first baseman Tommy Joseph opened the door to two unearned runs during the Rockies’ five-run first which also included a sacrifice fly by Jonathan Lucroy and an RBI single by Valaika.

“I didn’t make pitches at all tonight,” Pivetta said. “It’s clear I left balls in the middle (of the plate). When you’re in Colorado and facing a lineup like that, the way they are going right now, it’s not going to be good. The only thing I can do is learn from it, go forward from it and try to find that consistency.”

Colorado pulled in front 8-0, tacking on three more runs in the third when Valaika hit a two-run homer and Carlos Gonzalez had a sacrifice fly.

The Phils’ first run didn’t come until the fourth on Nick Williams’double-play grounder.

The Phillies loaded the bases with two outs in the fifth but first baseman Mark Reynolds made a diving catch of Galvis’ liner to end the threat.