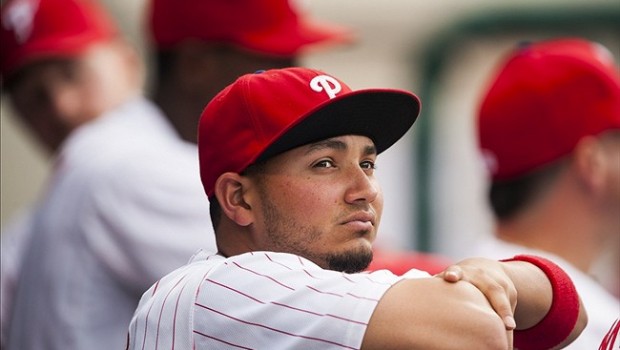 The man holding down shortstop in the 2015 Phillies line-up looks nothing like the Freddy Galvis fans had been used to seeing the past few years.

He was always a sure fielder but his bat left something to be desired.

Then the Phils traded legend Jimmy Rollins to the Dodgers and handed the position to Galvis, and he has risen to the occasion.

He’ shortened up his swing, leading to more ground balls, more balls in play and more opportunities to get on base.

Galvis finished Thursday’s 4-2 Phillies victory over the Pirates 3-for-3 with a walk, two runs scored and a stolen base. This was Galvis’ seventh three-hit game of the season and came in the middle of what is now an 11-for-25 stretch over the past two series.

But to Galvis, Thursday wasn’t about the hits he recorded so much as it was about how he recorded those hits.

“Today I hit three grounders and three base hits,” Galvis said. “I think that’s the key. When I stay on the ground, I can get base hits.”

The day improved Galvis’ batting average to .353, 79 points better than the next best everyday Phillie. To manager Ryne Sandberg, the fact that Galvis has been able to sustain this success this late into the season is a testament to how his approach is working.

“When you’re hitting it for 100 at-bats and starting to face teams for the second time, which he has, he’s just sticking with what’s working for him and being real patient out there,” Sandberg said. “He’s just really on the ball. He’s doing a nice job of really cutting down his swing and making some nice contact.”