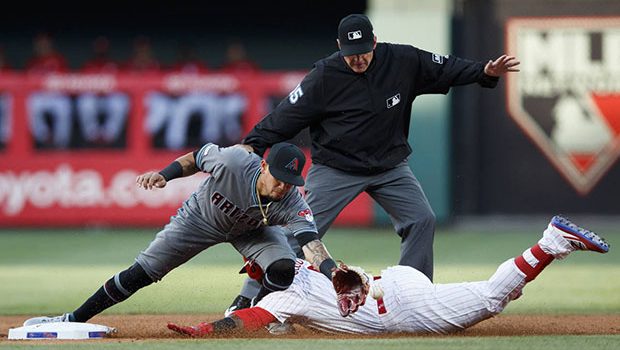 Kingery gave the Phillies a 3-0 lead in the second inning with a drive to left, his seventh homer and third in two games. He had eight homers as a rookie last year when he started at five positions and played everything but catcher and first base. He’s settled into playing center field or third base every day recently.

”Last year, it was a lot of crazy stuff going on, playing a lot of different positions and learning to hit major league pitching. I didn’t have time to relax,” Kingery said. ”I have more confidence now. My mindset and approach have changed.”

Arrieta (6-5) allowed three runs and six hits for his second win in eight starts. Hector Neris pitched the ninth for his 14th save in 14 tries.

”It’s a challenge but when my sinker is down in the strike zone efficiently, the ball stays in the ballpark,” Arrieta said about facing a team that hit eight homers Monday.

After Kingery’s homer, Bryce Harper ripped an RBI double to right to make it 4-0.

Jay Bruce made an excellent sliding catch to prevent at least one run on Marte’s sinking liner to left with one out and runners on first and second in the third.

”He was emphatic that he can play the outfield and play it well,” Phillies manager Gabe Kapler said of Bruce, who arrived in a trade on June 2. ”He’s done it well.”

Carson Kelly’s two-run double with two outs in the fourth cut it to 4-2. Eduardo Escobar’s sacrifice fly in the fifth got Arizona within a run.

The Phillies regained their two-run lead in the bottom half. Bruce had an RBI single after J.T. Realmuto hit a double on which Rhys Hoskins scored following a throwing error by left fielder David Peralta.

”Those are things we’re usually very good at. We throw the ball to the right base. We don’t compound things,” Diamondbacks manager Torey Lovullo said. ”We’ll clean that up and when we do we’ll win those margins.”

Marte connected off J.D. Hammer in the seventh.