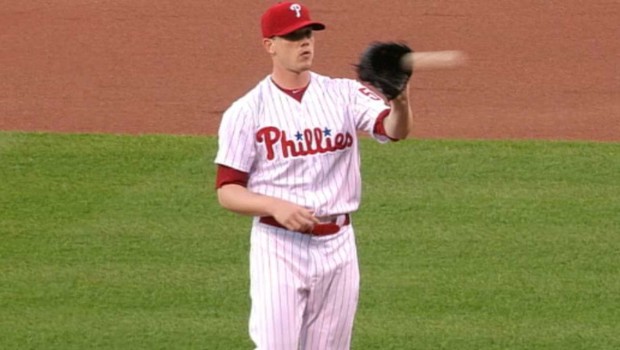 The Phillies’ little train that could steamed down the tracks again last night.

Jeremy Hellickson struck out more batters than he has in nearly three years and drove in the decisive run with a squeeze bunt in the Phillies’ 3-2 win over the Reds.

Hellickson struck out nine — his most since July 5, 2013 — and allowed only three Reds to reach base after the second inning, in which two came around to score on a sure third out that Tyler Goeddel dropped in the left-field corner. Jeanmar Gomez pitched a scoreless ninth for his major league-leading 14th save.

“My fastball command was a lot better than it’s been,” Hellickson said. “That was probably the best changeup I’ve had this year, too.”

The Reds went hitless following Adam Duvall’s second hit — a two-out single — in the top of the fourth inning.

“I think Hellickson really did a good job,” Reds acting manager Jim Riggleman said. “As the game went on, he got his changeup really working. We were swinging at it out of the zone. That’s the way the pitch is supposed to work. He really got sharp and he just held us down.”