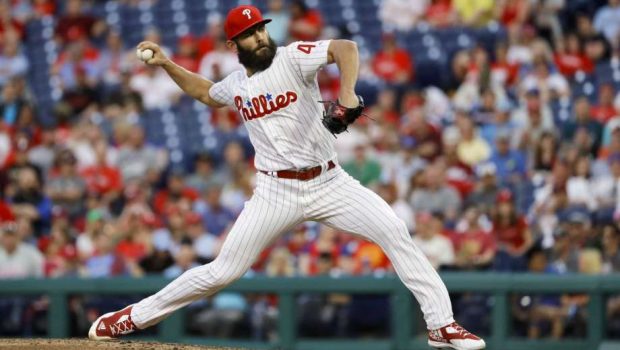 PHILLIES RIDE ARRIETA’S ARM PAST BRAVES, HALF-GAME OUT OF 1ST!

Jake Arrieta struck out seven in 6 2/3 sharp innings and the Phillies beat the Braves 4-0 and pulled within a half-game of first place Atlanta in NL East.

Arrieta (4-2) allowed seven hits and lowered his ERA to 2.45. The 2015 NL Cy Young Award winner showed exactly why the Phillies are paying him $30 million this season.

“The reason we got him is because he can go through one of the best lineups in the league three times,” Phillies manager Gabe Kapler said. “Never once did we feel he wasn’t in control.”

Even though it’s only May, Kapler called it a “big game” hours before first pitch.

“It felt a lot different,” he said.

Seranthony Dominguez retired the four batters he faced after entering with runners on second and third in the seventh. Hector Neris pitched the ninth to complete the eight-hitter.

Braves starter Luiz Gohara (0-1) gave up two runs and four hits in four innings in his first start of the season.

Gohara retired the first two batters in the third before Rhys Hoskins walked, Odubel Herrera reached on an infield single and Aaron Altherr walked to load the bases. Carlos Santana beat out a slow roller to third to give the Phillies a 1-0 lead.

That’s all Arrieta and the bullpen needed.

“It’s shaping up to be a good division and we have to play good ball,” Arrieta said.

Arrieta escaped a jam in the second after the Braves put runners on second and third with no outs. Ender Inciarte led off with a single and Johan Camargo hit a double. But Dansby Swanson grounded out to third, Gohara struck out andOzzie Albies bounced to first.

“That’s just a situation that determines that outcome of the game for me,” Arrieta said. “It’s an opportunity to preserve the game and I was able to get past that.”