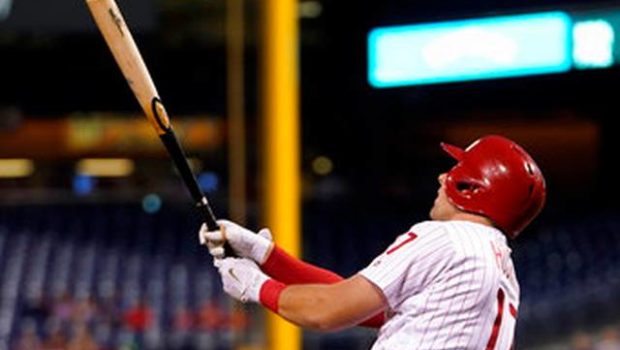 FOR PHILLIES’ RHYS HOSKINS, RED OCTOBER IS THE ONLY GOAL!

Rhys Hoskins had a phenomenal run in 2017:

“The time that I was up here, I think we played some pretty exciting baseball,” Hoskins told MLB.com on the final day of the regular season. “At times, we either pitched and didn’t hit or hit and didn’t pitch. That’s baseball. But I think it’s pretty special when we did both, and I think that’s pretty apparent.”

Did pitchers adjust to him? Or did the grind of his first six-month professional baseball season finally catch up with him?

“It’s something I’d never gone through, every day was a learning process, it really was,” Hoskins said. “It was a new thing that I’d never done before. My body is used to being home. It’s something that I’ll learn from. It’s tough, it really was. I’m not going to lie and say I wasn’t tired. I definitely was. But at the same time everyone else is in the same boat. You’ve got to learn from it.

“Hopefully sometime soon we’re worrying about how to play into October.”