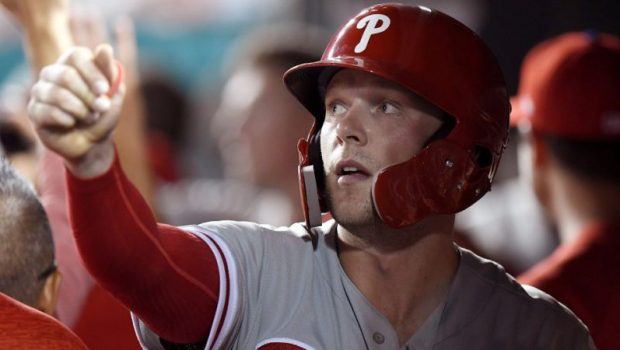 Comes with the territory of winning 27 World Series.

So, last night, when the Phils hosted the Yanks lots of Bombers’ fans showed up at the Bank.

And it was too much for Phillies slugger Rhys Hoskins.

In the sixth inning of the Yankees’ 4-2 win, Hoskins appeared to exchange a few words with a fan after he struck out but did not immediately run to first after the ball bounced away from the catcher.

While it was unclear what exactly Hoskins said — and reports were unclear if it was a Yankees fan or Phillies fan Hoskins had his exchange with — coming back up the steps to yell into the crowd was a bad look.

Hoskins was clearly aware of that, as he apologized for his actions after the game.

“Someone said something in the stands that obviously triggered me,” Hoskins told reporters postgame.

“I was pretty frustrated at the at-bat that I’d just had. I compounded the mistake. Got caught up in the moment. Shouldn’t happen. Can’t happen. But it did, and that’s how it goes.”

He added that “I was in the wrong.”