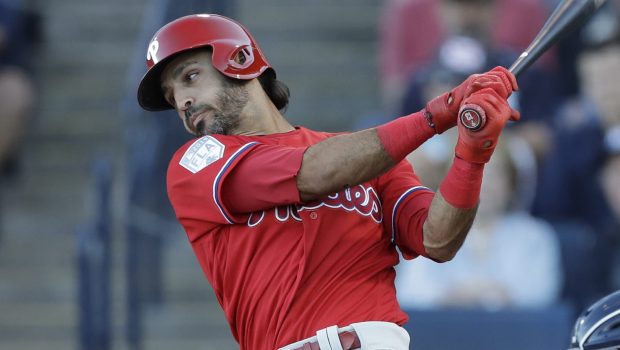 PHILLIES REWARD SEAN RODRIGUEZ’ LOYALTY, AND HE GETS A HIT!

The Phillies elevated Sean Rodríguez from Triple-A in time for him to start and hit seventh against the Mets last night, and he went 1-for-4 in the 6-0 victory.

Rodriguez, 33, played 12 games for Triple-A Lehigh Valley and hit .267 with four home runs and 12 RBIs. He had a chance to opt out after learning he didn’t make the Opening Day roster out of Spring Training, but he stayed with the organization because he feels it has a chance to go to the postseason.

“[It was] pretty clear, pretty evident during the offseason they are trying to win with the trades and signings that they made,” Rodriguez said. “Once [the Phillies] decided not to put me on the roster … I told them I was in it to win it. Those were my exact words to Gabe.”

The Phillies have been without shortstops Jean Segura and Scott Kingery, both of whom are on the injured list, with no timetable for a return. The last couple of days, the Phillies have used Phil Gosselin at shortstop, and he has been below average with the glove.

“It’s very important that we have somebody experienced,” Kapler said. “[Rodriguez] has quite a few innings at shortstop under his belt. It was important that we maintained the positive offensive profile against a few left-handed pitchers coming up while at least marginally improving the defense.

“I feel a spark could be valuable, and Sean has those characteristics. I know he has a tight relationship with [Andrew] McCutchen, but he also has formed bonds with other players in our clubhouse and he has formed bonds with our staff. They think really highly of Sean, and for good reason. I’m really glad he is here.”

In addition to Rodriguez, the Phillies recalled Enyel De Los Santos from Lehigh Valley and optioned right-hander Drew Anderson and infielder Mitch Walding to Lehigh Valley. De Los Santos started three games and had a 2.81 ERA for the Triple-A team. Walding was hitless in two-at-bats for the Phillies, while Anderson allowed five runs in six innings. Left-hander James Pazos was also designated for assignment. Pazos never played a Major League game for the Phillies; he had a 6.14 ERA in seven games for Lehigh Valley.