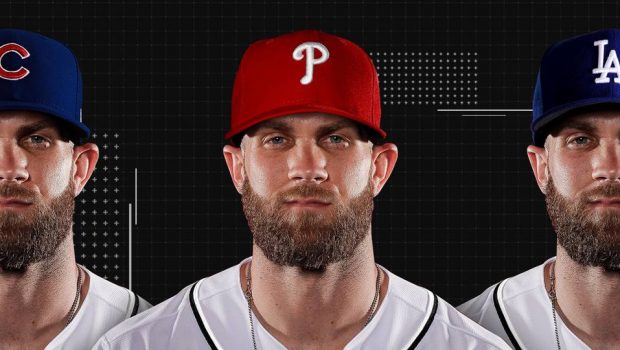 The Phillies have won the Bryce Harper sweepstakes, finalizing a deal with the free-agent outfielder, ESPN’s Jeff Passan is reporting.

Harper, the 2015 National League MVP, was one of the top prizes in this year’s crop of free agents. Infielder Manny Machado agreed to a 10-year, $300 million deal with the Padres, and it was thought Harper would exceed that contract.

The New York Post is reporting that the deal is for 13 years and $330 million, no opt-out!

Still only 26, Harper is already a six-time All-Star and was the NL Rookie of the Year in 2012. He is a patient hitter, known for belting a lot of homers and drawing a lot of walks, and has a .279 average with 184 homers, 521 RBIs and a .388 on-base percentage over his career.

“Because the player is entering the prime of his career, you’re really talking about a unique and rare opportunity,” his agent, Scott Boras said entering free agency. “Anyone who’s done what Bryce Harper has done at 25, if you’ve done that, you’re almost a lock to be a Hall of Fame player.”

Harper hit .249 with 34 home runs and 100 RBIs for the Nationals last season. He struggled for much of the first half, but won the Home Run Derby during All-Star festivities at Nationals Park and hit .300 with 11 home runs, 46 RBIs and 46 runs scored in 223 at-bats after the break. He led the NL in walks with 130 and ranked fifth in on-base percentage (.393).

One of the top topics of discussion for the Nationals — and all of Major League Baseball — going into the offseason was whether the team would be able to sign Harper to a long-term deal. According to reports, he turned down a 10-year, $300 million offer by the Nats.

He went into free agency having turned down the Nationals’ qualifying offer for $17.9 million. Because the Nationals are over the luxury tax, they would get a supplementary pick after the fourth round in compensation for Harper.

“He’s shown the type of player he is, and now he’s a grizzled veteran,” Nationals general manager Mike Rizzo said on Nov. 7. “He has done a lot in the game already, and he is just scratching the surface.”

Huge move for the Phillies. They get their man. Harper is the guy they wanted, the left-handed power hitter they needed. #Harper #Phillies