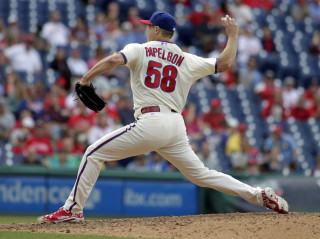 It is no secret that the Phillies have been trying to pawn off their overpaid, whining closer Jonathan Papelbon on another unwitting team.

So far no general manager has been as witless as Phils GM Ruben Amaro Jr.

But now comes word that Philly and the Milwaukee Brewers have apparently continued to talk about a Papelbon trade recently, but Ken Rosenthal of FOXSports.com says the latest negotiations fell apart when the Brewers tried to send reliever Jonathan Broxton to the Phillies as a way to offset Papelbon’s bloated salary.

According to Rosenthal the Phillies were only willing to cover a large chunk of Papelbon’s contract if they received “a top prospect” in return, whereas the Brewers suggested including Broxton in the deal rather than a minor leaguer with upside.

But apparently the Phillies decided downgrading from Papelbon to Broxton wasn’t worth saving a few million dollars and/or they’re still holding out some hope of cashing in Papelbon for a decent prospect at some point.