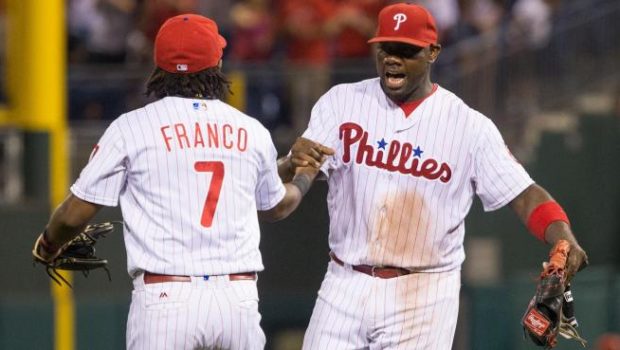 What in the world has gotten into 36-year-old Phillies’ slugger Ryan Howard?

When Howard is swinging the bat well, it can “make a world of difference,” Phillies manager Pete Mackanin said last night.

A surging Howard played a big role in the Phillies’ come-from-behind, 5-4 win over the Dodgers. The 36-year-old first baseman hit his fifth homer in nine games, and his bat played a role in Maikel Franco’s go-ahead, two-run homer in the seventh inning.

Franco crushed a pitch off Dodgers lefty Grant Dayton, who Los Angeles manager Dave Roberts wanted in the game to face the left-handed-hitting Howard, the next hitter. It was the 22nd homer of the year for Franco, who entered the game with a slugging percentage 100 points higher against lefties than right-handers this season.

“It’s huge, when you have that presence in the lineup swinging the bat like he is,” Mackanin said of Howard.

Franco’s home run was a shot to straightaway center field and also scored Freddy Galvis, who led off the frame with a single.

“[It felt] very good, very good,” Franco said. “It was a fastball right down the middle, and I put a lot of contact on it. I just tried to put it in play.”

When Franco and Howard are both swinging the bat well, it gives the Phillies a formidable 1-2 punch in the middle of their order. While both batters have had their share of ups and downs this season, Howard has heated up in the past two months, especially in August.

Howard has been platooning with Tommy Joseph for a good portion of the season. But lately Howard has stayed in games against lefty relievers due to his hot bat. Mackanin said that would have been the case again on Thursday regardless of what Franco did in the seventh inning.

“He just looks like he’s seeing the ball a lot better,” Mackanin said of Howard. “He’s made some adjustments to his swing path, and he’s more spread out than he has been, kind of reverting back to the way he used to hit.”