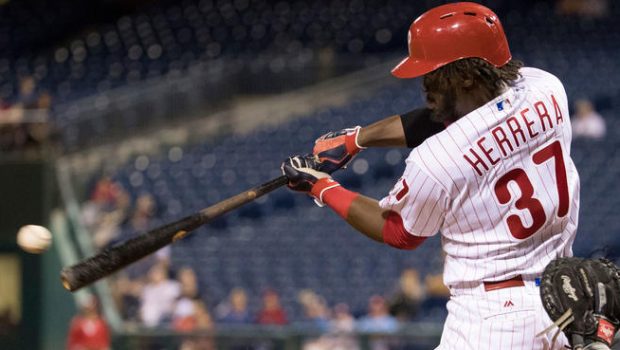 Don’t look now, but the Phillies have surged to a 12-7 record, and they are only two games back of the Mets in the NL East!

Odubel Herrera hit a go-ahead triple in the eighth inning to lift the Phils to a 2-1 victory over the Pirates.

Herrera, Cesar Hernandez, Carlos Santana and Maikel Franco each had two hits for the Phillies, who have won nine of 11 overall while improving to 7-1 at home — their best start at home since they won seven of eight to begin the 1981 season.

“You can definitely feel a different vibe, a positive vibe,” Herrera said.

It didn’t start exactly that way this season in front of the Phillies faithful, who booed first-year manager Gabe Kapler during introductions before the home opener following some questionable moves on Philadelphia’s road trip to begin the season. But those boos quickly have turned to cheers as the Phillies have strung together one win after another at Citizens Bank Park, standing as the only NL team with just one loss at home.

“It’s incredibly gratifying to win at home,” Kapler said. “I believe playing here at home in Philly is a big competitive advantage for us.”

Luis Garcia (2-1) pitched a scoreless eighth inning, and Hector Neris blanked the Pirates in the ninth to earn his third save in four tries.

After Hernandez led off the eighth with a double and Santana grounded out, Herrera lined an 86-mph cutter from George Kontos (1-2) on a 1-2 count just inside the first-base bag to score Hernandez and give the Phillies a 2-1 lead.

“It felt really good,” Herrera said through an interpreter. “I have a plan and that’s to put the ball in play.”

Rhys Hoskins walked to put runners on first and third with one out before as bizarre a double play as you will see ended the inning. Kontos had Hoskins picked off, but first baseman Josh Bell threw home to get Herrera, who broke for the plate on the play. Hoskins then lost track of the outs and also was out on a caught stealing double play that was scored 1-3-4-2-5-8-7.

“We saw something we tried to exploit and the Pirates executed,” Kapler said. The manager added that he talked to Hoskins after the game and “we’re going to move on.”

The Pirates threatened in the ninth when Jordy Mercer doubled with one out, but David Freese popped out in the infield and Adam Frazier grounded out.

The Pirates took a 1-0 lead in the sixth. Francisco Cervelli was hit by a pitch, went to third on Colin Moran’s double and scored on Mercer’s sacrifice fly to right.

The Phils tied it in the bottom half when Santana scored on Hoskins’ fielder’s choice grounder to third. Santana reached third on Herrera’s single to right, and Herrera tied a career high on the hit by reaching base safely in 21 consecutive games.