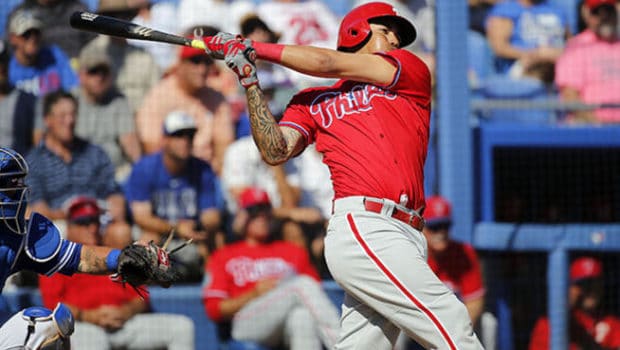 PHILLIES PROSPECTS CRAWFORD AND ALFARO WILL SEE BIGS THIS YEAR!

Crawford remains a consensus top-10 prospect, though his rapid ascent through the minors hit a wall during his four months in Triple-A last season, when he hit .244/.328/.318.

The good news is his plate discipline remained intact (72 walks on the season). It’s just a matter of consistent hard contact and developing more power. Freddy Galvis isn’t a road block, and the speculation in Philly is that if Crawford hits well at Lehigh Valley, he could be up sometime in May.

He’s still the catcher of the future for the Phillies, and this is his final minor league option year, so this is his last chance to refine a game that still has some holes — most notably his lack of plate discipline (22 walks, 105 strikeouts in Double-A) and need for consistency on the finer points of his defense.

After playing for Colombia in the World Baseball Classic, he had just eight at-bats in the Grapefruit League. Alfaro’s power potential and arm strength are grade 80 tools to dream on. Barring an injury to Cameron Rupp or backup Andrew Knapp, he probably spends the first four months or so at Lehigh Valley.