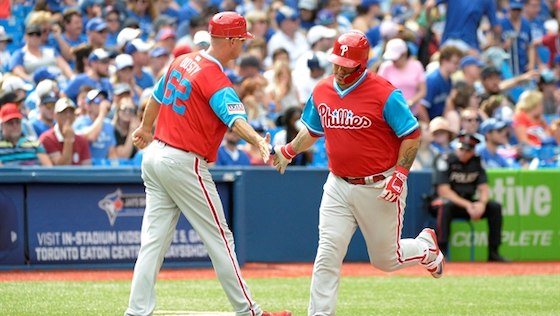 PHILLIES POWER OUT OF THEIR SLUMP, STAY 3 BACK OF BRAVES!

The Phillies went on a homer binge, connecting for four in their 8-3 win over the Toronto Blue Jays..

Rhys Hoskins and Carlos Santana went back-to-back in the first inning while Maikel Franco and Wilson Ramos each had two-run shots.

“There was a noticeable energy change in the dugout from yesterday to today,” Phillies manager Gabe Kapler said. “Our guys sensed the urgency of today’s game.”

Right-hander Vince Velasquez (9-9) allowed two runs and three hits in five innings for the victory as the Phils won for the second time in eight games, erasing the painful memories of Saturday’s 8-6 defeat.

The Phillies remained three games behind Atlanta in the NL East, and two games out in the wild card race.

“Everybody was just a little bit more intense, a little bit sharper focus,” Hoksins said. “Everybody got here this morning and realized that this was a big game. Obviously they’re all big but this one in particular felt a little bit bigger, especially after a tough loss yesterday.”

Ramos had four hits. He singled in the first, doubled home a run in the second, singled in the sixth and homered off Tyler Clippard in the eighth, his 15th.

“We swung the bats from the very beginning of the game and stayed on them, never took our foot off the gas pedal,” Kapler said.

Estrada (7-10) allowed five runs and seven hits in two-plus innings. He said afterward he has been bothered by a sore back for several few weeks.