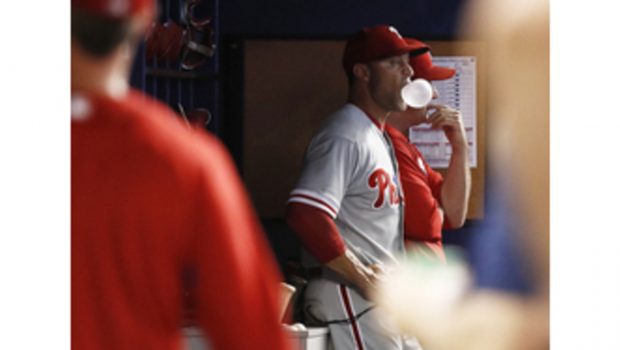 September is only six days old and already it looks like the Phillies’ postseason hopes are resembling a slow-motion car crash.

Sandy Alcantara pitched shutout ball into the eighth inning and the Marlins beat the visiting Phillies 2-1.

The Phillies swept a four-game set from the Marlins from Aug. 2-5, and have lost 18 of 28 games since — with no series wins in any of their last nine opportunities. They remained three games behind Atlanta in the NL East race, after the Braves wasted a 7-1 lead and lost 9-8 earlier Wednesday to Boston.

“We set out to win every baseball game,” Phillies manager Gabe Kapler said. “And our pleasure or our disappointment hinges on how we perform, and not really what Atlanta’s doing.”

Jose Bautista had a pinch-hit double and eventually scored on Asdrubal Cabrera’s flare into left field in the eighth, but the Phillies mustered nothing else.

Derek Dietrich scored both Miami runs, the first when Dean hit into a fielder’s choice in the second, the other on Dean’s single to center in the fourth. Both of those runs were charged to Phillies starter Nick Pivetta (7-11), who gave up three hits and two runs in four innings.

“Their starting pitcher did a tremendous job,” Pivetta said. “But at the end of the day, I was the guy who gave up two runs, so it’s on me.”

Drew Steckenrider allowed a walk and a single with one out in the ninth, but finished off his fourth save with a pair of strikeouts.

Phillies catcher Jorge Alfaro, who had singled twice off Alcantara and had three hits on the night, got plunked in the left arm when a fastball from the Marlins rookie sailed up and in. Alfaro wasn’t amused, took a long stare toward Alcantara as he walked to first.

But Alcantara wasn’t rattled, and fanned Wilson Ramos on three pitches to end the inning with his 2-0 lead intact. The Marlins let him hit in the bottom of the seventh, then sent him back out for the eighth — pulling him only after the walk to Quinn.

That runner didn’t hurt Miami. Santana lined out to second baseman Starlin Castro, Quinn got caught 30 feet off the bag and the Phillies went from having the leadoff runner aboard to having the bases empty with two out.