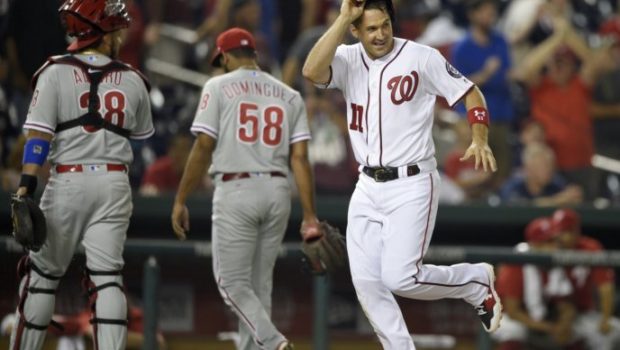 PHILLIES PLAYOFF HOPES MAY HAVE DIED WITH A WALK-OFF JACK!

Don’t look now, but the Phillies’ playoffs chances are on life support.

And you can look no further than the hopeless Washington Nationals as the killer.

Ryan Zimmerman hit a two-run home run with two outs in the ninth inning to lift the Nationals over the visiting Phillies 8-7 on Wednesday night.

Juan Soto’s two-out double against Seranthony Dominguez (1-4) set up Zimmerman. His drive landed just above the right-field wall and required video review before umpires confirmed the homer. Zimmerman has 11 walkoff home runs for his career, trailing only Albert Pujols (12) among active players.

Soto nearly ruined Washington’s fun. Zimmerman remained on second base during the review. After the final call, the excited 19-year-old ran from home toward the infield as Zimmerman neared third base.

Maikel Franco, Justin Bour and Cesar Hernandez homered for the Phillies, who led 7-5 in the seventh. The Phillies, who have lost four in a row and nine of 13, fell three games behind NL East-leading Atlanta.

“Big challenge to have a tough week like we’ve had and then to have an excruciating loss like the one we had tonight,” Phillies manager Gabe Kapler said. “Our guys aren’t going to hang our heads. We’re going to come back swinging tomorrow.”

Stephen Strasburg allowed five runs and seven hits over four innings for Washington in his first start since being placed on the 10-day disabled list on July 26 with a cervical nerve impingement.

Bryce Harper had three hits with a run-scoring double and a stolen base for Washington.

Matt Grace (1-1) worked 1/3 of an inning for Washington, which has won two in a row since trading second baseman Daniel Murphy and key reserve Matt Adams on Tuesday. The Nationals are 7 1/2 games behind Atlanta for the NL East lead.

Pinch-hitter Andrew Stevenson’s sacrifice fly in the eighth cut the Phillies lead to 7-6.

Dominguez, who has three blown saves in August, threw three sliders to Zimmerman before going fastball on the decisive 2-1 pitch.

“I was throwing sliders, but then when I was behind in the count I was looking for the corners,” Dominquez said via an interpreter. “My plan was yes to make him uncomfortable with the sliders.”

Strasburg made just his second start since June 8. After returning from a DL stint due to shoulder inflammation, the right-hander surrendered six runs and eight hits in 4 2/3 innings in a losing start against Atlanta on July 20 before returning to the disabled list. He has not made it past the fifth inning in three consecutive starts.

Though Strasburg struck out the side in the first inning, he allowed four consecutive two-out hits and three runs in between. Franco turned on a hanging curveball for his 21st homer of the season as the Phillies led 3-0.

“I spent the last two months just fuming over (not being with the team),” Strasburg said. “I was happy to be back out there tonight. Great win for us.”