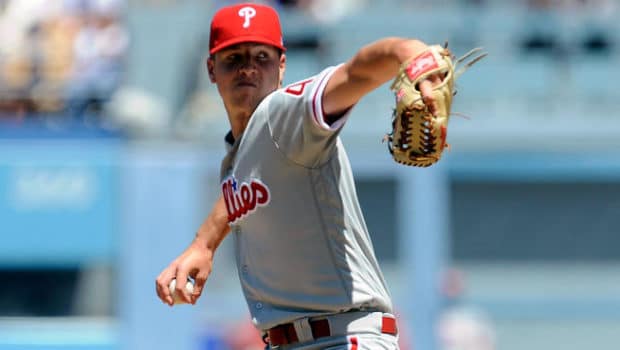 Nick Pivetta allowed one hit in seven impressive innings for his second career win, and the Phillies halted New York’s four-game winning streak with a 7-1 victory.

“My arm felt really, really good today, which was nice. I felt really confident going into the game,” Pivetta said. “Just had fun, you know?”

Maikel Franco hit a two-run double in a four-run second aided by a pair of sacrifice bunts. Rookie catcher Andrew Knapp added an RBI single and dashed home from second on a wild pitch by Rafael Montero.

Leadoff man Daniel Nava had three hits and two RBI to help the major league-worst Phillies (27-53) finish their 4-5 road trip on a positive note. The Phils outhit the Mets 12-2 and improved to 15-32 against them since the start of the 2015 season.

“He had everything working today. I was really happy with the way he attacked these guys,” Knapp said. “It’s a tough lineup and you can get a little intimidated by some of the names in that lineup, but he went and attacked a lot of guys with his fastball and got ahead of a lot of hitters. That helped him a lot.”

Making his 10th big league start, Pivetta (2-4) permitted only T.J. Rivera’s home run on an 81 mph slider with one out in the fifth. The 6-foot-5 right-hander, obtained from the Nationals in a July 2015 trade for closer Jonathan Papelbon, struck out four and walked four.

“I think he still needs work on his secondary pitches, but once he hones those pitches, he’s got a chance to be really good. I really like him,” Phillies manager Pete Mackanin said . “He certainly showed that he learned something from his last outing.”

Pivetta was coming off the worst performance of his brief career, when he gave up six runs, seven hits and five walks over 2 2/3 innings last Monday in a 6-1 defeat at Arizona.

“That was my No. 1 focus, is a rebound right there,” Pivetta said. “I just had an off outing last time.”

Tommy Joseph and Nick Williams opened the second with consecutive singles before Franco doubled off the base of the left-center fence to snap slumps of 0 for 13 and 5 for 33.

After a sacrifice by Pivetta, Montero (1-5) threw a wild pitch that ricocheted off the foot of plate umpire Ramon De Jesus and bounced away. Mets catcher Rene Rivera had no idea where the ball went, and Knapp never broke stride as he rounded third.

“I called a changeup. He threw a curveball,” Rivera said.

By the time he tracked down the ball near the Phillies’ on-deck circle, Knapp was sliding home ahead of an off-target throw.

“When you’re not the fastest guy, you’ve got to go hard all the time,” Knapp said. “The way we’re playing, we need all the bases we can get.”

A replay reversal and some clumsy defense helped the Phils score three times in the eighth off Chase Bradford. Pinch-hitter Brock Stassi had a two-out RBI single, and Nava followed with a two-run single.