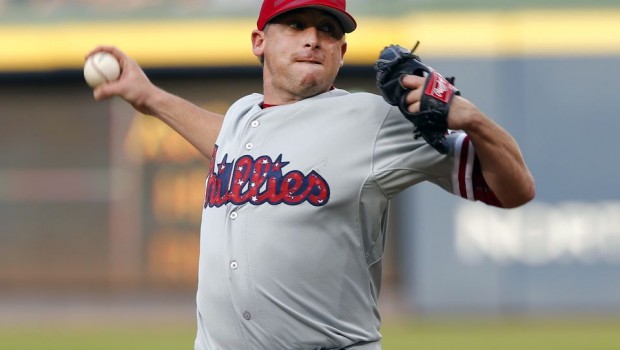 The Phillies don’t want to rush Aaron Nola to the majors.

We all get that.

But reality may overtake all their plans because:

As Mike Tyson was fond of saying, “Everybody has a plan until they get hit!”

Well, the Phillies can’t hit and they seemingly can’t pitch, as they proved last night in giving up nine runs in Atlanta.

Phillies right-hander Kevin Correia (above) allowed 10 hits and nine runs in just 3 1/3 innings Saturday night in a 9-5 loss to the Braves at Turner Field. I

“We were on the bench talking about it,” Phillies interim manager Pete Mackanin said. “It gets more difficult as we go along because by the time we get to the middle or end of August these guys [the relievers] hopefully are not going to be used up. A lot of appearances. A lot of innings. A lot of pitches thrown. Something’s got to give. We’ve got to get length out of our starters. At least two or three of them.”

The Phillies rotation entered Saturday averaging the third-fewest innings per game (5.59 innings per start) in baseball, which has put a tremendous strain on the bullpen.

“Since I got here, that’s the thing I think about most, how to keep pitchers healthy and not overdoing it,” Mackanin said.

Cole Hamels, who pitches the series finale this afternoon, has been the only consistently reliable starter of the group, and he could be traded before the end of the month. Sean O’Sullivan pitches Monday in Los Angeles. He has pitched six-plus innings in just five of 12 starts. Chad Billingsley, who pitches Tuesday, has pitched more than five innings just once in four starts.

Correia has not reached six innings in five starts.

“That’s the most frustrating part,” Correia said. “I can deal with getting hit around. I can deal with pretty much anything. But I want to be out there as long as possible, and that’s just not happening right now.”

What are the options? Well, Aaron Harang is on the disabled list with plantar fasciitis. Jerome Williams is on the DL, but he carried a 6.43 ERA and pitched six-plus innings in just five of 14 starts.

Nola is the best and most logical choice. He allowed nine hits, three runs and struck out six in six innings Saturday night against Rochester. He has a 2.28 ERA in four starts with the Lehigh Valley IronPigs. The Phillies are mindful of his innings pitched, considering he has not pitched to this extent in the past. They also do not want to rush their prized prospect, but the time for his promotion is drawing near, regardless of when or if Hamels is traded.”In my position, I’m not even going there,” Mackanin said about Nola. “I’m not going to ask them. That’s up to the front office. They see the same thing we’re seeing. I’m sure they’re not real crazy about it either.”

Another option is David Buchanan, who rejoined the Triple-A rotation Thursday after being on the DL with an ankle injury. He allowed one run in 6 1/3 innings in his first start back.