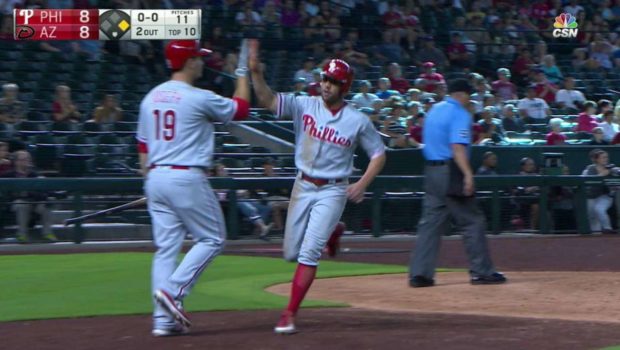 No Phillie had a better road trip than Peter Bourjos, who excelled in front of his hometown fans.

Bourjos finished 2-for-5 and scored the game-winning run in the 10th inning in the Phillies’ 9-8 victory that completed a sweep in the series finale at Chase Field yesterday. The Phillies won five of the nine games on the road trip, and Bourjos is a big reason why.

“Bourjos was probably the MVP of our trip,” Phillies manager Pete Mackanin said. “The guy just turned it on and started playing like an All-Star.”

Overall, the outfielder racked up six hits in the series against the D-backs, including a two-run home run in the first inning to give the Phillies an early 2-0 lead. He hustled out an infield single with the game tied at 8 in the 10th and scored the deciding run on a sacrifice fly to right field by Tyler Goeddel.

“I think the hitters are having better at-bats, and the pitchers are doing a good job of keeping us in games,” Bourjos said. “You can really see the offense starting to take shape, and a lot of guys are starting to feel comfortable in the box and figure some things out.”

“I think I was trying to do too much,” Bourjos said. “I’m starting to realize that you don’t have to swing hard to hit the ball hard.”

Bourjos, who was claimed off of waivers last December, grew up near Chase Field in Scottsdale, Ariz. He said most of his family was in attendance for yesterday’s game, including his father Chris Bourjos, who sat among the baseball officials behind home plate taking notes.

“I live here in the winter time,” Bourjos said. “My dad is a scout and the Diamondbacks are one of his teams he has to cover, so he matched up against us, of course.”