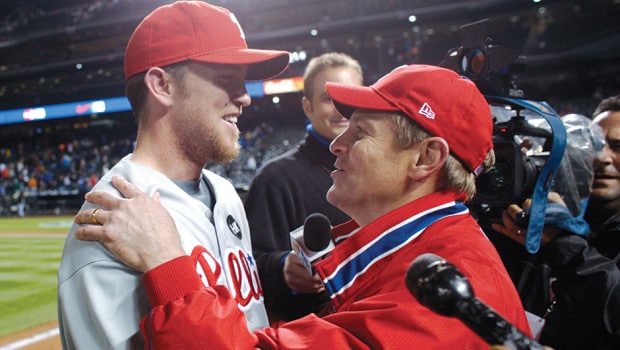 PHILLIES OWNER MIDDLETON: ‘I WANT MY F-ING SERIES TROPHY BACK!’

If you want to get a glimpse into why the new-look Phillies are on the right track, check out an otherwise tedious and torturously long thumb-sucker in Philly mag on owner John Middleton, who is as competitive as most of his players.

The Phillies lost to the Yankees, and after the sixth and deciding game, John Middleton [above with 2008 ace closer Brad Lidge] went into the visitors’ locker room in the Bronx. Ryan Howard was sitting alone, his head down. In a red Phillies windbreaker and hat, Middleton knelt before him, and put his hand on Howard’s leg.

“Ryan, I want my fucking trophy back. It’s fucking ours.”