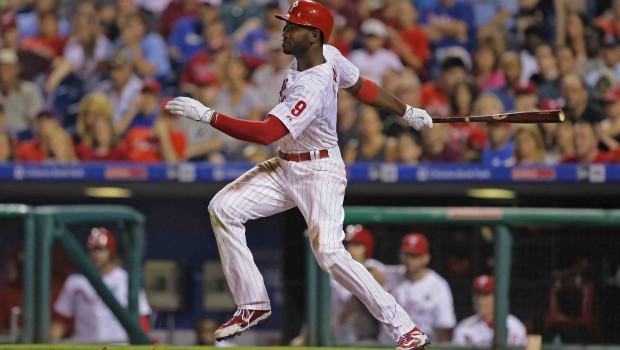 On the night after the Phillies traded one of the greatest pitchers in their 132-year history, a couple of under-achievers helped them to a victory.

Domonic Brown (above) homered and Harang snapped his losing streak at eight starts, leading the Phillies to a 4-1 victory over the Atlanta Braves Thursday night.

Carlos Ruiz had two RBIs and every Phillies starter had at least one hit as they won their 10th game in the 12 since the All-Star break.

Harang (5-11) was making his first start since going on the disabled list on July 2 with plantar fasciitis in his left foot. He allowed one run and nine hits with three strikeouts and one walk in five innings to earn his first victory since May 14.

The Phillies played for the first time since the reported deal that will send ace left-hander Cole Hamels, along with lefty reliever Jake Diekman, to Texas. Details of the trade with the Rangers still were being finalized Thursday night, and Diekman was in uniform in the Phillies bullpen. Hamels’ locker remained intact although he wasn’t seen in the clubhouse before the game or in the dugout during it.

”I didn’t see him,” Mackanin said. ”He might’ve been lurking in the shadows somewhere.”

Shelby Miller (5-8) extended his winless streak to 13 starts after giving up four runs and 11 hits in six innings. A.J. Pierzynski had two hits and an RBI for slumping Atlanta, which lost for the 14th time in 18 games while dropping its 11th road game in the last 12.

”I gave up a lot of hits, some not hit that hard, but that happens,” Miller said. ”I thought I made some good pitches. The homer was a bad pitch.”

Run support continued to be a problem for Miller, who has received just 11 runs over his winless stretch. He entered last in the NL in run support.

”We didn’t score many runs for him,” Atlanta manager Fredi Gonzalez said.

Ken Giles pitched a scoreless ninth for his second save since taking over the closer’s role after Philadelphia traded Jonathan Papelbon to the Nationals on Tuesday. Giles hit at least 100 mph on his first three pitches.

Pierzynski’s RBI single in the third gave Atlanta a 1-0 lead, but the Braves wasted a chance to score more in the frame in which they loaded the bases with no outs.

The Phils took the lead with two runs in the fourth on Ruiz’s two-run single. Ruiz was playing in his 1,000th career game.

Ryan Howard’s RBI single in the fifth upped the Phillies lead to 3-1, and Brown hit Miller’s first pitch in the sixth inning over the wall in right field. It was the first homer of the season for Brown, who last went deep on Sept. 16, 2014.