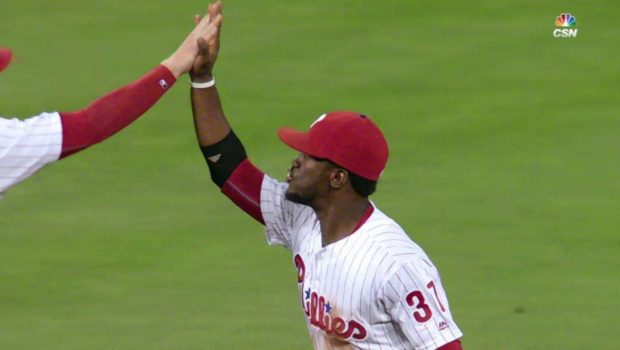 PHILLIES’ ODUBEL HERRERA LOOKING AND PLAYING LIKE AN ALL STAR!

The MLB All-Star selection show isn’t until Tuesday, and don’t be surprised to see Odubel Herrera as the Phillies’ representative at in the game in San Diego on July 12.

Barely a season-and-a-half removed from not earning a spot on the Rangers’ 40-man roster, Herrera led off the Phillies’ 4-3 win with his ninth blast of the season, over the left-center-field wall at Citizens Bank Park.

Herrera, a native of Venezuela, speaks to the media through a translator. When asked if he thought he was deserving of a trip to San Diego, Herrera responded in English: “For sure,” he said, before cracking his signature mile-wide grin. He finished the night 2-for-4 with a walk.

When the Phillies took Herrera in the 2014 Rule 5 Draft, he was a scrawny, free-swinging second baseman. Now, he’s a burgeoning All-Star center fielder — who now wears his socks high.

In the third, Herrera swiped second and advanced to third on a rare errant throw from catcher Salvador Perez. That came on the heels of his 43rd walk of the season, a category in which he long ranked among the best in baseball. Herrera still leads the Phillies in bases on balls but has fallen outside the top 10 in the Majors.

A half-inning earlier, Herrera, an outfielder for less than two years, ranged back near the track in right-center and made a leaping grab at the wall, robbing Kendrys Morales of extra bases. Always adding a pinch of flare to the game, the 24-year-old let his momentum carry him face-first to the ground, where he lay for a moment with the ball in his glove.

His leadoff home run was the first of his career, but it was his ninth long ball of the season. In 537 plate appearances last season, he put only eight balls over the wall. It took him exactly 200 fewer to break that number this season.

“This is his second year in the big leagues,” manager Pete Mackanin said. “The type of hitter he’s going to become is going to include some more power. It’s just a matter of time before he settles in. He doesn’t try to hit home runs, but if you make a mistake to him, he can do it.”

Herrera’s nine home runs don’t lead the Phillies, but they come close. And he leads the team in a handful of other offensive categories: WAR, runs scored, average, on-base percentage, to name a few. Only Maikel Franco and Ryan Howard have more home runs.

Although Herrera did not crack the top 15 among National League outfielders in fan voting, he has put up an All-Star first half for a team that would struggle to provide a nominee without him. Closer Jeanmar Gomez, who has 22 saves and a 2.82 ERA, would likely be the second choice.

Herrera plays with passion and energy, flipping his bat not only on his nine home runs but nearly every other plate appearance, too. With three multi-hit games in his last five, Herrera is making a late push for the All-Star squad (and has raised his batting average back above .300). But neither Selection Tuesday nor the game itself are on Herrera’s mind.