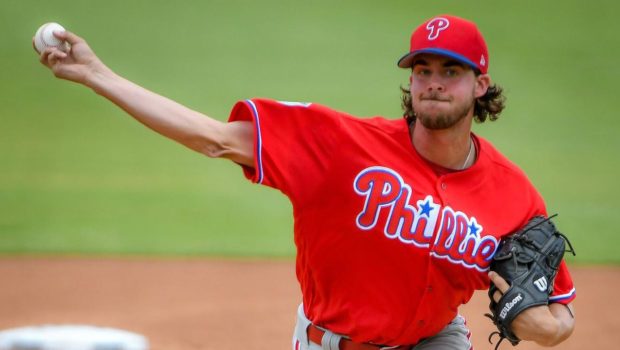 PHILLIES’ NOLA WASN’T IN COMMAND BUT HE FELT ‘REALLY GOOD!’

Phillies right-hander Aaron Nola struggled yesterday with “spotty” command, allowing five hits, two runs, one walk and striking out two in two innings against the Tigers in the Phils’ 11-6 victory.

He threw 40 pitches (27 strikes). He hit 92 mph on the radar gun. It was Nola’s second start, but more importantly, it was his second healthy start.

“Maintaining a healthy body and healthy arm is big for me,” Nola said. “So far it’s been healthy. I feel really good.”

Nola finished last season on the disabled list with a low-grade sprain of his UCL and a low-grade strain of his flexor pronator tendon in his right elbow. He received a platelet rich plasma (PRP) injection in August and experienced a successful rehab in the fall in Clearwater.

He has had no elbow issues this spring.

Nola, who is expected to be the No. 5 starter, expects the command to come.

“I was kind of missing over the plate on some pitches, but other than that I felt good,” he said. “My arm felt good, my body felt good.”