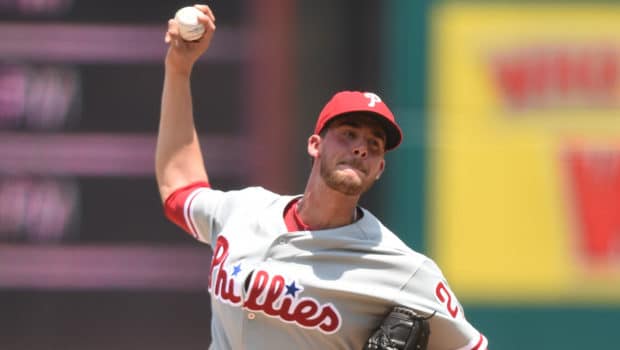 PHILLIES NOLA STARTS REHAB THIS WEEK — SEE YOU IN 2017!

Phillies starter Aaron Nola, arguably the best pitcher of the team’s young arms, ended his season with sprains and strains of ligaments in his right elbow in August.

Nola started his throwing program this week in Clearwater, Fla. The Phillies are hopeful he will be ready to go by spring training, although there is some level of concern about his recovery.

“So far, so good,” Phillies general manager Matt Klentak said last night at Turner Field. “No pain. No issues. He feels great. We’re going to keep going. He will begin with flat ground, stretch it out to throwing from further distance, eventually get up on the mound and eventually throw to hitters. All those things need to happen, but we’re going to be pretty conservative with the pace.”

Right-hander Zach Eflin is another one of the organization’s top young starters. He is scheduled to have left knee surgery within the week. Eflin’s season ended in August because of patellar tendinopathy in both of his knees. He had right knee surgery last month. The Phillies also expect him to be ready by spring training.

Nola and Eflin are not the organization’s only young talents battling health issues. Outfielder Roman Quinn strained his left oblique on a swing Tuesday night. He suffered the same injury earlier this season in Double-A, and it forced him to miss more than six weeks.

Quinn said the oblique felt better yesterday, but he is day to day. There is a decent chance Quinn does not play again this season, considering there is no reason to risk further injury with only four games remaining.

Right-hander Edubray Ramos has some soreness in his right elbow. Phillies manager Pete Mackanin did not seem to be overly concerned about it, although it is unclear if Ramos is available to pitch.